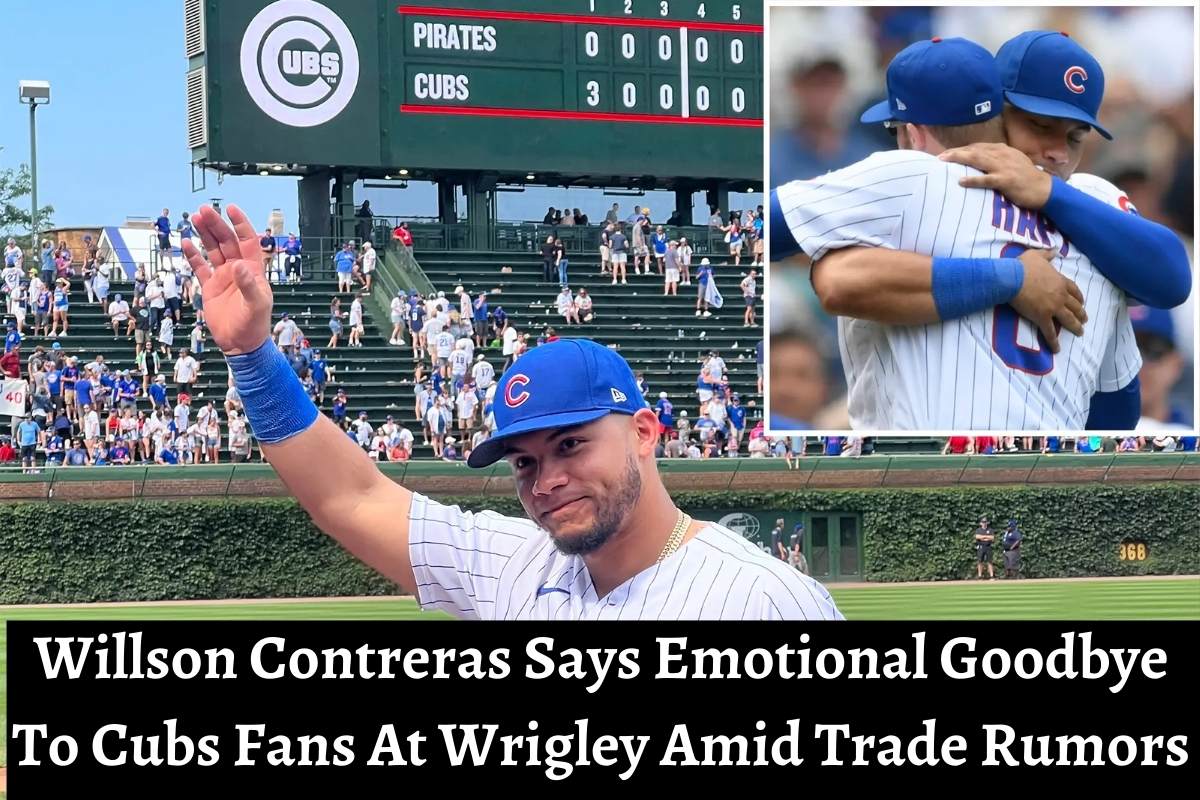 Willson Contreras may have played his last game at Wrigley Field as a Cub. The Cubs are about to go on a seven-game road trip, and the MLB trade deadline is a week away.

Willson Contreras is one of only six players from Chicago’s 2016 World Series team who are still with the team. The Mets are said to be interested in the 30-year-old catcher who has been an All-Star three times, but even if he doesn’t end up in New York, Contreras will almost certainly end up somewhere else.

Even though Willson Contreras was a rookie in 2016, he seemed to know that he was leaving the only team he has ever known on Tuesday.

As “Go Cubs, Go” played over the Wrigley Field speakers after the Cubs’ 6th straight win, a 4-2 victory over the Pirates, Contreras hugged many of his teammates. Whether or not it was goodbye, it felt like it.

When Willson Contreras stepped up to the plate in the bottom of the eighth against Pittsburgh, the crowd started chanting “Willson!” His eyes were full of tears.

Contreras told reporters on Monday, “The last few days have been hard for me.” “I’m trying to enjoy everything Wrigley Field has to offer by remembering all the good times I’ve had here since 2016… This is probably the last time I’ll see fans at home this year. I find it hard.

“I knew it would eventually get to me. I wish today hadn’t come. It’s a business, though. I’m aware of it. I understand.”

If Tuesday was Contreras’ last game at Wrigley, he went 1-4 and scored a run while playing designated hitter. He’s cutting down on the year. With a batting line of 258/.374/.473 and 14 home runs and 37 RBIs, he is one of the best hitters in baseball, not just among catchers. He also has a strong arm.

He might not be the only player leaving town, either.

As the Cubs continue to rebuild, there have been rumors about trading Ian Happ. Even though he said he didn’t want his time with the Cubs to end, it might soon. Before jogging off the field, the 27-year-old outfielder put his cap over his heart and waved to the fans in the outfield.

Also likely to be dealt with is reliever David Robertson. The 37-year-old right-handed reliever had Tuesday off for the second day in a row.

Ian Happ and Willson Contreras share an emotional embrace in the dugout after possibly their final home game together. 😭💔

There have been rumors that Robertson, who has 14 saves, a 1.83 ERA, and 50 strikeouts in 39 and a third innings this season, could be part of a deal involving the Mets.

After  Willson Contreras and Happ won on Tuesday, they embraced the moment and each other.