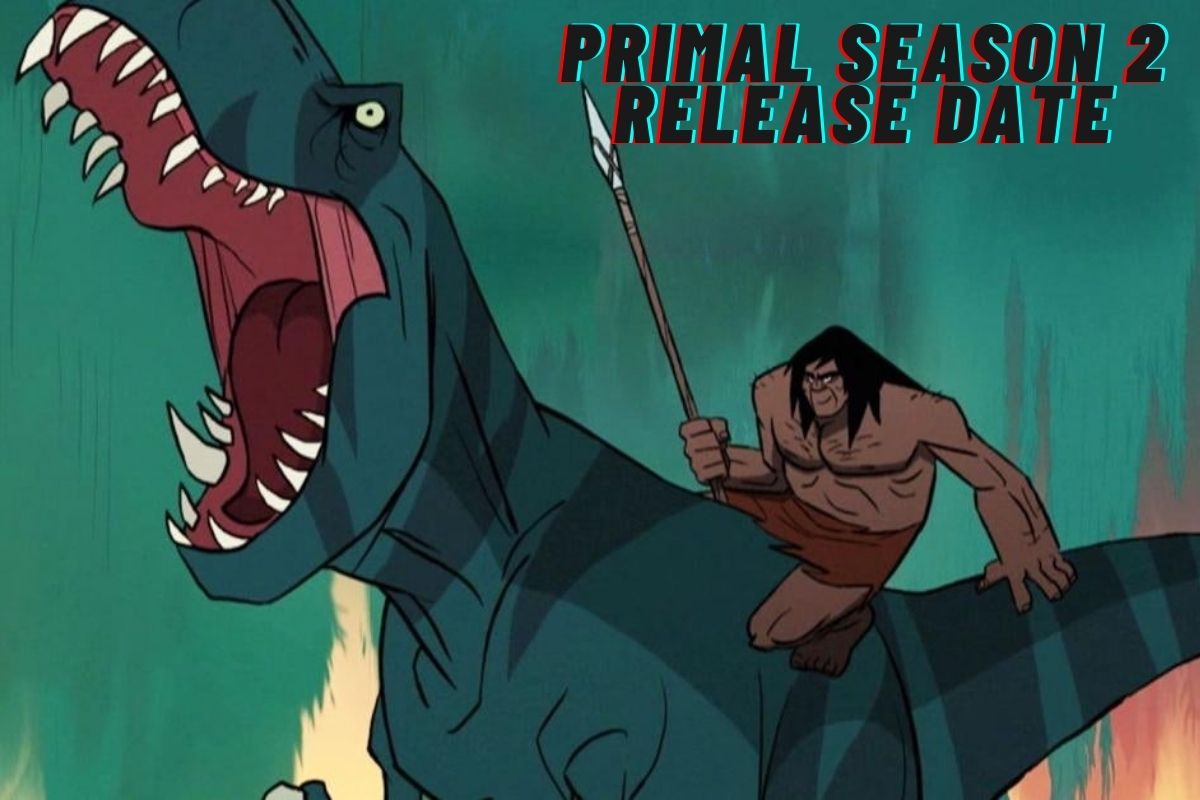 One of the most wonderful American adult animation action-adventure television series to come out on 8th October 2019 was Primal Season 1. Genndy Tartakovsky, director of “Dexter’s Laboratory” and “Samurai Jack,” is behind the camera. His team came up with a great, edge-sitting, engaging and gratifying plot.

It instantaneously resonated with the audience in the first few episodes alone where many sitcoms failed to recognise the pulse. Primal Season 2 is almost here, and it’s safe to say that the show’s fans can’t wait.

“Survival and evolution” has always been at the heart of the Primal franchise. A prehistoric man and his dinosaur set out on an epic trip in Season 1. The graphic violence and the underlying deep topics captivated a huge viewing base.

Genndy Tartakovsky is building anticipation for Primal Season 2 with his two Emmy victories for ‘Primal.’ According to him, Season 2 of the Primal franchise will be nothing like before, ‘his best work‘ thus far. It will preserve emotion but will undoubtedly ‘push the genre out of clichés’.Primal Season 2 has stirred up the media as fans are growing restless by the second. Keep reading to learn everything there is to know about this topic!

When Primal came released initially in 2019, it got aired in two parts of 5 episodes. Even before the publication of the second batch, Adult Swim already announced the renewal of the show.

On 14th February, an announcement of an official release date for Primal Season 2 was released. Primal Season 2, directed by Genndy Tartakovsky, will now be released on a certain date. Since last year, fans were kept updated about a new season in the works with hints about its upcoming premiere.

Tartakovsky, the filmmaker informed his followers on Primal’s behind-the-scenes progress on Instagram. As per him, the last storyboard panel of the last episode of Primal Season 2 got finished in October. It’s a long way to go now with work barely halfway done! It was believed that the Primal Season 2 release would happen in summer of 2022.
We now have a year and a month’s worth of notice, thanks to the announcement. The second season of Adult Swim’s Primal will premiere in the summer of 2022, according to the Television Critics Association’s Winter Virtual Press Tour. Teh same was shared officially via tweet. A teaser video was also released to coincide with the announcement. The developers are yet to announce a specific release date for the new episodes. Fortunately, we are not far off from the Summers.

How many episodes with Primal Season 2 have?

Though there isn’t much official confirmation about Primal Season 2 episodes, however, there are fan predictions. It is likely to go the way of the first season. It will contain 10 episodes like its predecessor. But there is no intel on how the makers will air the episodes. Will they be separated into two parts or all 10 episodes in one go.

Most shows like Primal eventually end up being cliche. The developers, on the other hand, have gone to great lengths to prevent this! In fact, Tartakovsky reinvented the whole plot of this upcoming season and opted to be more experimental than previously. In his perspective, Primal Season 2 might be the best thing he has ever done.
The second instalment of the series might likewise focus on tracking down Mira. As a cavewoman, Mira made an appearance in the first season’s season finale. In Season 1, it was too late to help her when she was kidnapped a second time. Spear and Fang can end up trying to hunt for her as she symbolises the last amount of kindness Spear can have in his life.

Genndy Tartakovsky says Primal season 2 needs to defy the action genre: “If we were to elevate Primal into a barbarian adventure, or a sword-and-sorcery-type story, it could live in that world but still get away from clichés” https://t.co/uNfTfY5CkF pic.twitter.com/QYSTLo4VFI

As you can see, the plot of Primal Season 2 is still in the dark. That, in fact, is fantastic. The creators thus have a lot of opportunity to hit the viewers with unexpected plot twists and developments.

Primal is primarily a silent animation series without many dialogues. There are some grunts and roars, although they are rare. As a result, there is not a vast cast of top notch voice actors involved.

There has been confirmed of Laetitia Eido-Mollon voicing Mira in Primal Season 2. This greatly opens up the possibilities of more speaking characters entering into the drama. Aside than Spear and Fang’s efforts to save Mira, we have no idea what to expect from the upcoming season.
But it is undoubtedly apparent that Genndy Tartakovsky has mastered his art of animation and storytelling– one of a kind and arguably, one of the most successful creators.

The first season of Primal is currently available on HBO Max and Adult Swim for those who can’t wait for more information about Season 2.

Mushoku Tensei Season 2 Release Date: Everything You Need To Know!

No official trailer has been provided by the creators as of this writing. One might expect Primal Season 2 trailer to appear near to the release date. In the meantime, one can revisit the Primal Season 1 trailer and guess the storey of the following season.

Where can I watch Primal Season 2?

Fans are anxiously awaiting the news of a release date, which might occur at any moment. Till then, one can revisit or stream all the episodes of Season 1 on the Adult Swim website or HBO Max. Will keep this place updated but you guys stay tuned with us!