The Elder Scrolls 6 is undoubtedly a thing, at the very least in terms of its concept! It’s possible that we’ll be able to get our hands on it at some point in the near future. It was revealed during the Electronic Entertainment Expo in 2018 that The Elder Scrolls 6 will be released after many years of clues, Skyrim re-releases, and Skyrim remasters, among other things. The Elder Scrolls 6 was announced in 2014, and the game is set to arrive in 2022, so if we’re still wondering about it, we may be halfway through the voyage between the announcement and the game’s eventual release.

Almost nothing has come out of the faucet since then, but for a trickle of information here and there. After initially maintaining a surprising amount of secrecy, Bethesda has deftly avoided any attempts to disclose further information after making its announcement. Because it has been more than three years since that announcement, and because Starfield is scheduled for release later this year, it is plausible to conceive that we will be returning to Tamriel in another three years. If you’re looking for something to do while you wait for The Elder Scrolls 6, you might try playing the new Skyrim Anniversary Edition, which was launched this week on the PlayStation 4.

Considering that The Elder Scrolls V: Skyrim is widely regarded as one of the greatest role-playing games of all time, it’s only natural that fans would be anxious to get their hands on a new installment. Even while it hasn’t gone unnoticed that there is a great desire for The Elder Scrolls 6, Todd Howard has said unequivocally that Starfield is the company’s current priority before shifting their focus to Tamriel.

The fact that Starfield will be released in the near future does not suggest that The Elder Scrolls 6 is complete at the time of writing. Despite a major collaborative presentation by Microsoft and Bethesda over the previous few years, it was surprising to see no high-elf or expansive mountain scenery at E3 2021. While we weren’t expecting to hear any new information on the title anytime soon, the fact that it is again another announcement season without any new information is disheartening nevertheless.

As a consequence, we continue to enquire as to when it will be made available. What part of Tamriel will it take place in exactly? We don’t know much about The Elder Scrolls 6 since it hasn’t been officially revealed by Bethesda, but here’s all we know about the game so far based on speculations and interviews, including the release date, setting, and other facts.

In What Year Will The Elder Scrolls 6: Skyrim Be Released? –

Keep your collective breath out of your mouth. It is quite probable that it will take place within this decade or the next. Probably.

The Elder Scrolls VI: Oblivion is set to be published in November 2022, and we already know that Starfield will be finished before the release of the game. As previously stated, Phil Spencer has said that the next Fable game would be finished prior to the publication of TES6, for which we do not have a release date at this time. As a result, ready to strengthen your defenses.

While attending the 2018 Electronic Entertainment Expo, Todd Howard personally revealed the teaser trailer for The Elder Scrolls 6: Oblivion (E3). Given that this is the first and only official look we’ll get at the next game in the series for quite some time, it’s critical that you examine it as carefully as you possibly can. In case you’re interested in going a step further, we’ve delved into some fan supposition based on the teaser video, which you can see down below.

Will The Elder Scrolls 6: Skyrim Be Only Available On The Xbox One?

The news that Microsoft has bought Bethesda Softworks has already reached the general public. It is doubtful that this statement will have any immediate negative implications for PC game gamers. If the past is any indication, Microsoft will be more than delighted to distribute Elder Scrolls 6 on PC, maybe even via Steam, in the near future. You’ll most likely have to go via the Windows 10 shop to get your hands on a copy, while PlayStation 5 customers will be left out in the cold.

Financially, The Elder Scrolls 6 was almost certainly going to acquire every cash it need to become the next blockbuster Bethesda RPG, but the addition of Microsoft’s pocketbook is sure to be beneficial as well. When the time comes, the game will most likely not be available on the PS5, but it will be available as a day-one Game Pass deal. That will be a really compelling argument to join the program.

The announcement of the Elder Scrolls 6 Xbox exclusive coincides with Microsoft’s 20th-anniversary commemoration of the original Xbox platform, which is now underway. Phil Spencer, the CEO of Microsoft, was a bit more subtle, adding “I want us to be able to deliver the whole package of what we have to Xbox in order to be considered for inclusion. In fact, when I think about Elder Scrolls 6, I realize that this is accurate.” Yes, according to the statement obtained, The Elder Scrolls 6 will not be released on PlayStation.

How many E3s have passed since we heard anything about The Elder Scrolls VI: Skyrim?
Todd Howard bestowed both a gift and a curse on us by unveiling Elder Scrolls 6 at E3 2018, despite the fact that Starfield (which is slated to release before ES6) is still in production. We’re a patient bunch, so we’re simply going to casually count the number of years since E3 in which we haven’t heard anything new about Elder Scrolls 6.

“I believe everyone should be extremely patient,” Todd Howard said in an interview with IGN.

In the year 2020, the letter E(not)3 will be used. According to Pete Hines, “If you’re coming to me for information now rather than years from now, I’m not doing a good job of managing your expectations.”

In an interview conducted soon after E3 2021, Todd Howard said that “it’s good to think about The Elder Scrolls 6 as still being in the design [phase].”

When And Where Does The Elder Scrolls 6 Take Place?

Because there is so little information, Elder Scrolls enthusiasts have turned to dissecting everything Elder Scrolls-related in order to uncover hints, beginning with the first teaser video that was released in 2018. Todd Howard speculated that there are clues in the teaser, stating that it provides “hints as to where it’s taking place.” That has been taken up by the community. Todd Howard himself has revealed that the location of The Elder Scrolls 6 has already been selected and that this choice was taken quite some time ago. “The Elder Scrolls 6’s location has already been decided,” he says.

In an attempt to figure out the setting of The Elder Scrolls 6, we’ve taken a go at it ourselves. 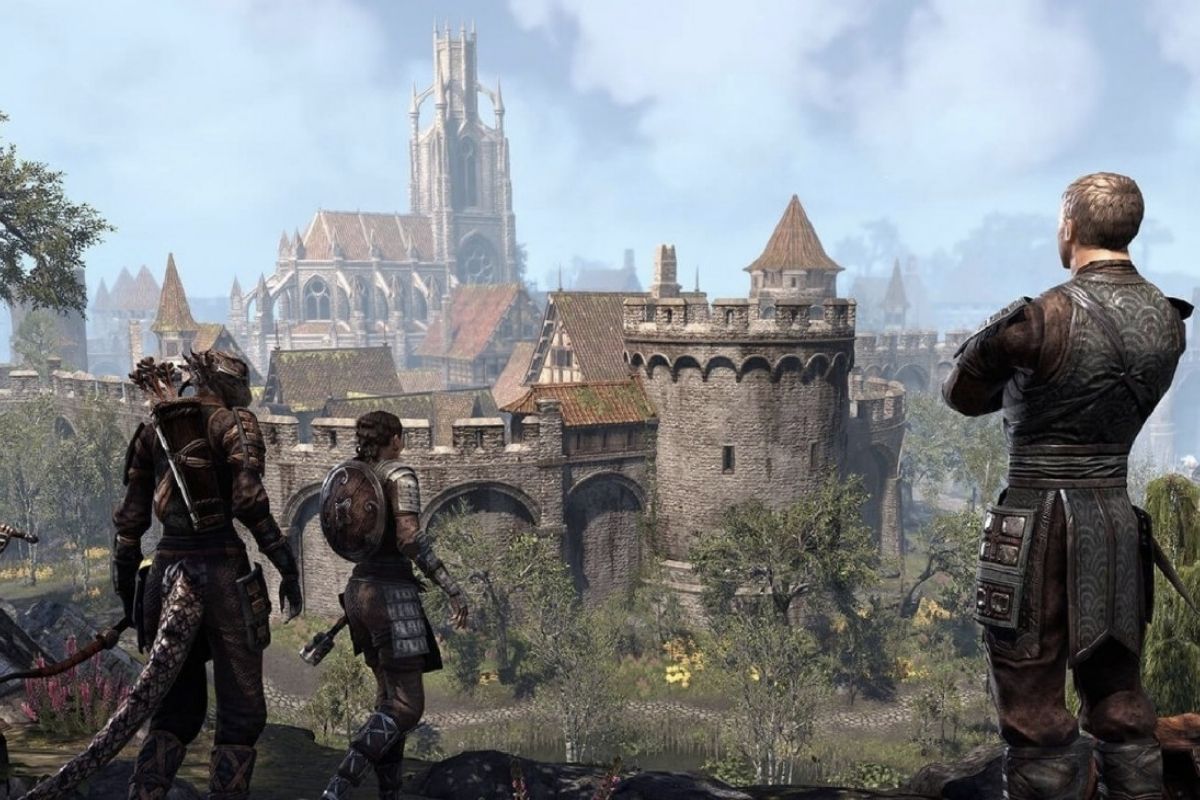 It’s a logical assumption to make, and it’s now the most prevalent hypothesis. The first teaser clip displays rocks and the characters look to be high. There you have it: High Rock. However, it isn’t nearly enough to be certain. The terrain of TES evolves significantly over time, and High Rock has already been explored extensively in the early games. Hammerfell, Morrowind, Cyrodiil, and Skyrim have all done the same.

The Starfield video from E3 2021 had a probable Elder Scrolls teaser, which added fuel to the fire of conjecture. A very little scrape on the inside of a spaceship’s interior seems to be a depiction of a continent, which raises suspicions. Aside from that, it has the appearance of Tamriel’s Illiac Bay, which is located between High Rock and Hammerfell. It’s a very little element that may easily be overlooked, but it does have a unique form. Speaking of Hammerfell, it’s possible that Bethesda has previously mentioned it as a possible locale for the game. It’s possible that everything is coming together.

Hammerfell, according to a New Year’s tweet from Bethesda towards the very end of 2020, is another probable location for the game. No one is exactly sure whether the picture provided is a genuine hint to the next Elder Scrolls 6 game, but the remark about “mapping the future” certainly seems to be a possibility. Fans have suggested that the location of candles on the picture may be a hint, particularly the one put under the term “Hammerfell” in the undrawn portion of the map west of Skyrim, which has sparked the greatest interest. In the first teaser trailer, the Redguard people live in Hammerfell, which contains the Alik’r Desert, which might correspond to the rocky, arid area featured in the new teaser video.

Mods Will Be Supported In The Elder Scrolls 6: The Frozen Throne?

Modding Bethesda RPGs has become somewhat of a cornerstone of the PC gaming community. There’s simply something about a player community being given the opportunity to produce some genuinely great works that make the universe seem to be in perfect harmony with itself. According to the official website, The Forgotten City is a completed game based on the Skyrim mod.

While the repercussions of Bethesda’s rough Creation Club launch haven’t completely gone, we can expect that The Elder Scrolls 6 will be moddable to a high degree. According to Bethesda, even Fallout 76, a multiplayer online game, will someday be moddable.

Look forward to the continuation of Thomas the Tank Engine, Destroyer of Worlds’s legacy in the future.