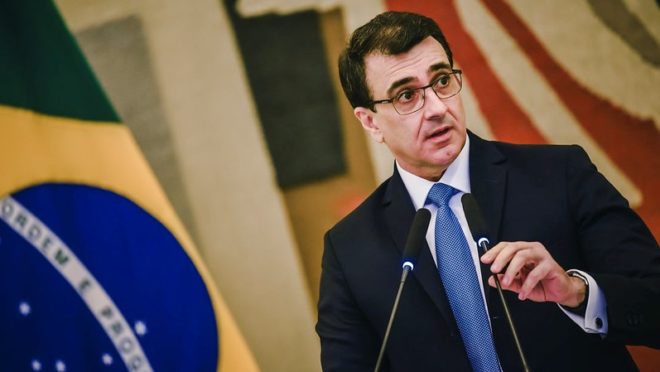 Carlos França said that the Brazilian position is one of impartiality, not indifference| Photo: Gabriel Albuquerque/MRE

The Minister of Affairs Exteriores, Carlos França, said this Monday (28), in an interview with GloboNews, that the Brazilian position is one of “balance” in the war between Russia and Ukraine. He said that when President Jair Bolsonaro spoke, this Sunday (27), of “ neutrality”, meant “impartiality”.

)For him, Brazil’s role in the United Nations Security Council is to “find a way out”, to be “a builder of consensus” and “to call the parties to negotiation”.

Questioned later about Brazil’s position at the UN in favor of reviewing the economic sanctions applied by the United States and Europe against Russia, Carlos França said that they alone “do not solve it”.

“We don’t want to point out a culprit. In this sense, only sanctions we believe do not solve the problem. It is really necessary that the Security Council use all possible means of negotiation to call the parties to dialogue”, he said.

He later added that he feared that sanctions would be selective, mentioning that trade in gas, oil and aluminum may not be subject to embargoes. “For a country like Brazil, the issue of fertilizers and the grain trade is very important. Ukraine and Russia are now important suppliers of wheat, for example, worldwide,” he said.