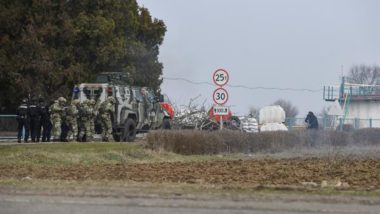 Ukrainian police and National Guard soldiers take part in an exercise near the village of Kalanchak, in the Skadovsk district, in the Kherson area of ​​southern Ukraine. | Photo: EFE/EPA/OLEG PETRASYUK

The mayor of the Ukrainian city of Kherson, Ihor Kolykhaiev, said this Wednesday (2) that Russia has taken control of the municipality. According to the president published on his Facebook profile, the inhabitants of Kherson must now comply with the instructions of “armed people who have come to the administration of the city”.

“We have no Armed Forces in the city, only civilians and people who want to LIVE here!” Kolykhaiev posted. According to the mayor’s statement, there are new rules in the city, which include a curfew, restrictions on transportation and a limit on pedestrians on the streets.

Kherson is a strategically important city, located in an inlet of the Black Sea, and with a population of about 214 thousand inhabitants. In the publication, the mayor states that the Ukrainian forces left the municipality.

In an interview with the New York Times, Kolykhaiev also stated that a group of about 10 Armed Russian officers, including their commander, stormed the city hall building this Wednesday.

With information from CNN.