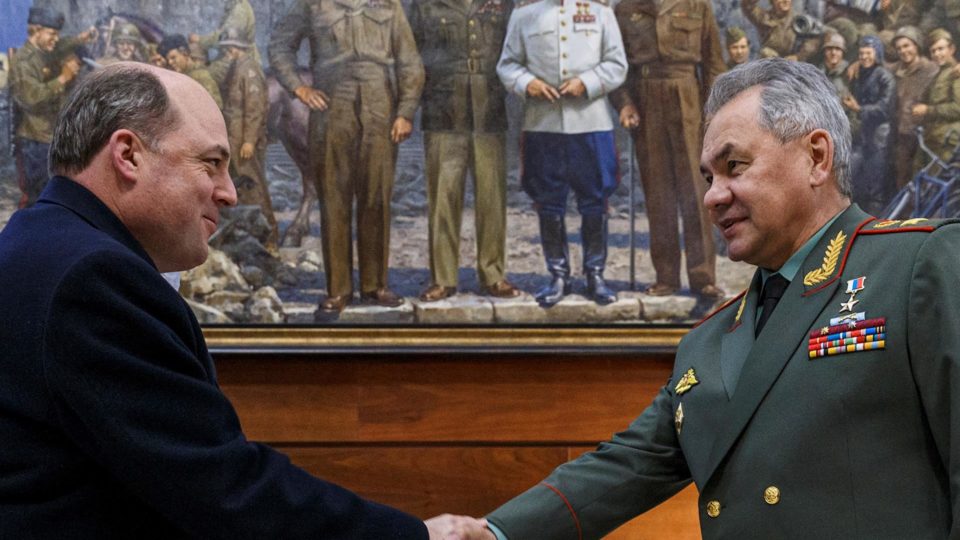 While the United States highlighted this Friday (11) that Russia may invade Ukraine by next week, UK Defense Minister Ben Wallace said that the Russian government, through the Defense Minister Serguei Shoigu and the Chief of Staff Valery Gerasimov assured that this will not happen.

“We heard statements from Mr Shoigu and General Gerasimov that they would not invade Ukraine,” Wallace told a press conference at the UK Embassy in Russia.

Wallace, who described the meeting with the Russian minister as “constructive and frank”, urged the military leadership of Russia “to engage in dialogue as a way to resolve any concerns the Russian government may have.”

“I made clear the tragic consequences that any invasion of Ukraine would have for all people, both Ukrainian and anas as Russians, and for the security of Europe”, he emphasized.

The British minister stressed that the fact that Russia has positioned more than 100 military on the Ukrainian border and carrying out maneuvers with Belarus a few kilometers from Ukraine allows Moscow to attack the neighboring country “at any time”.

“Obviously, this magnitude of forces gives them the ability to carry out a wide range of actions, including an invasion of a neighboring country at any time”, he analyzed.

According to Wallace, “perhaps due to the state of preparation for combat because of the maneuvers active in Belarus, it is clear that this is an option these forces have.”

“We made it very clear in NATO that an invasion would have tragic consequences and I am here, for example, to look for a way to defuse this tension”, he declared.

“I have clearly heard from the Russian government that there is no intention to invade Ukraine and I have also heard some of their concerns. We think, as indicated by NATO’s response to the Russian proposal for a treaty (on security guarantees) in December, that these concerns can be addressed through a series of measures”, he opined.

In the words of the British minister, these would be “confidence measures, better transparency, inspections, continuation of existing treaties”, but “making it clear that there is an inherent right of all parties to security and to be able to freely choose their alliances”.

Wallace conveyed to Shoigu that the Atlantic alliance is a defensive organization and does not want to attack anyone, in response to Russia’s demand that the organization not expand further eastward and not use offensive weapons. close to its borders.

The British minister, who noted that relations with Russia are at 0%, said at the moment, “with 100 thousand soldiers prepared s for combat on the border of another country, it is extremely important that there are no miscalculations or escalations.”

“Only through a relationship and the ability to dialogue in difficult times can we pave the way for de-escalation measures”, he argued.

Earlier, US Secretary of State Antony Blinken had issued a warning about Russia invading Ukraine” anytime, including during the Winter Olympic Games”, which are taking place in Beijing until the next day 19.

The government member chaired by Joe Biden made the statements in Melbourne, after meeting with representatives from India, Japan and Australia, during a meeting of the Quad defense alliance. Blinken said that all citizens who are on Ukrainian territory “should leave” because of the risk of conflict.

“There are signs of a Russian escalation. We are in a window where the invasion can start at any moment”, said the head of US diplomacy, who insisted that the country and allies are “strongly” betting on dialogue”.

Blinken warned that there is also work on deterrence and defense measures and that Moscow will face “massive consequences” if it chooses to invade Ukraine, including economic sanctions, limitations on exports and an increase in the military capabilities of the neighboring country and NATO.

Furthermore, the Defense Secretary highlighted the importance of supporting Kiev in the defense of “territorial integrity” and “sovereignty”.

In this sense, he warned that the border tension, with the threat of 100 a thousand Russian troops and the military maneuvers in Belarus, could set a dangerous precedent in other regions, such as the Indo-Pacific.

Blinken attended meeting of the Quadrilateral Security Dialogue (Quad) defense alliance, together with the foreign ministers of Japan, Yoshimasa Hayashi, of India, Subrahmanyam Jaishankar, and of Australia, Marise Payne.

Members of the group, created on 2007, but which had been inactive for years, also agreed on topics such as international “coercion” of “autocratic” governments in the region, not to mention China, as well as climate change and Covid vaccines-19, between others.

Jake Sullivan, US National Security Advisor, reiterated the guidance for US citizens to leave Ukraine, as a Russian invasion “will likely start with aerial bombardments and missile attacks that obviously can kill civilians regardless of their nationality.”