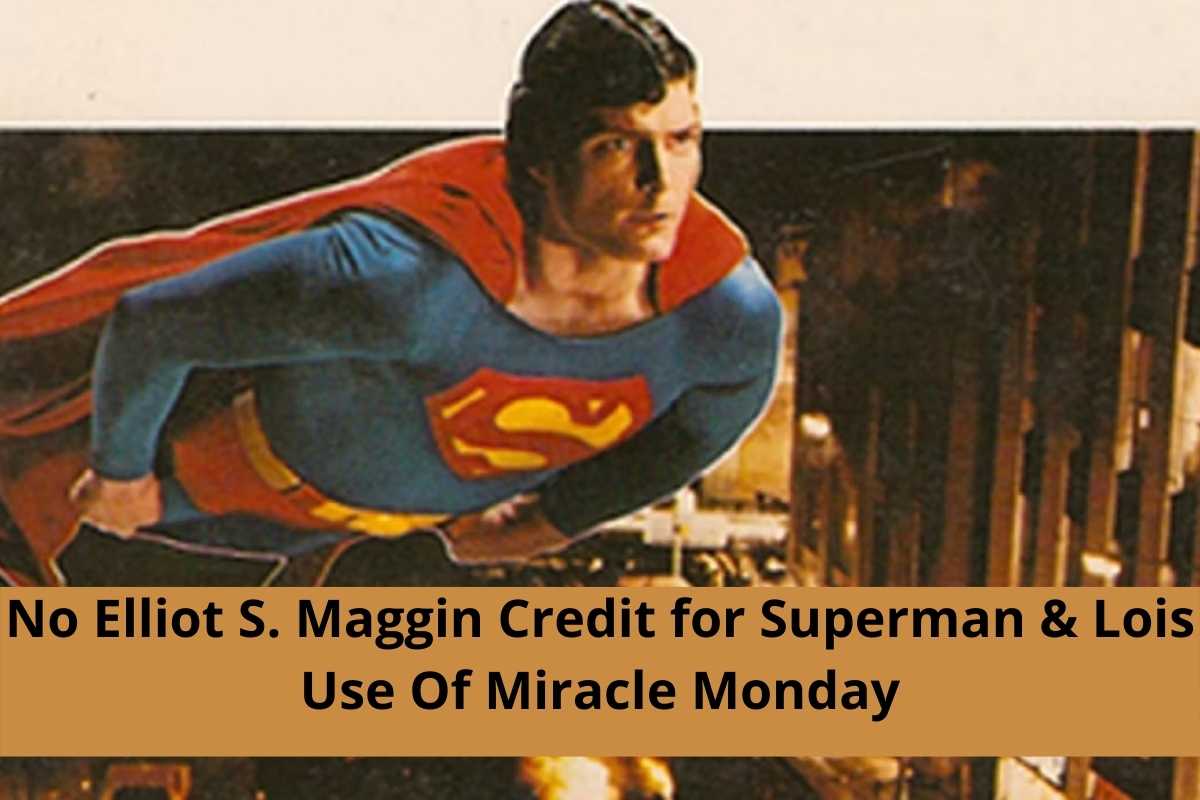 The DC Comics hero Superman appears in the book “Miracle Monday,” which was first published in 1981 and has since been reissued. The novel was written by the Superman comics writer Elliot S. Maggin. His second Superman book, which was published as part of a tie-in series for the Superman film franchise, was not written in a way that is consistent with the films.

The time traveler Kristin Wells makes her first appearance in this work. She would go on to feature in the comics both as herself and as Superwoman in the years to come. And it takes its name from the annual festival that was first celebrated in the book, which was called Miracle Monday.

This celebration would later appear in the Superman comics, with the people of Earth-honoring Superman’s deeds. It is important to note that even though Elliot S. Maggin may not own the characters who appear in the book, such as Clark Kent, Lois Lane, Perry White, and Jimmy Olsen, he does own the book itself.

He has the copyright to the book as a result of a contract that was arranged following the success of his first Superman novel, and this includes the title of the book. The conclusion of the second season of Superman & Lois aired last week, and it included a public event in Smallville.

During the ceremony, Lana Lang congratulated Superman for saving the world once, and she designated the day as the holiday known as Miracle Monday. Caveat Corner Books’ most recent edition has a cover that was drawn by Ken Penders, who also wrote the following: 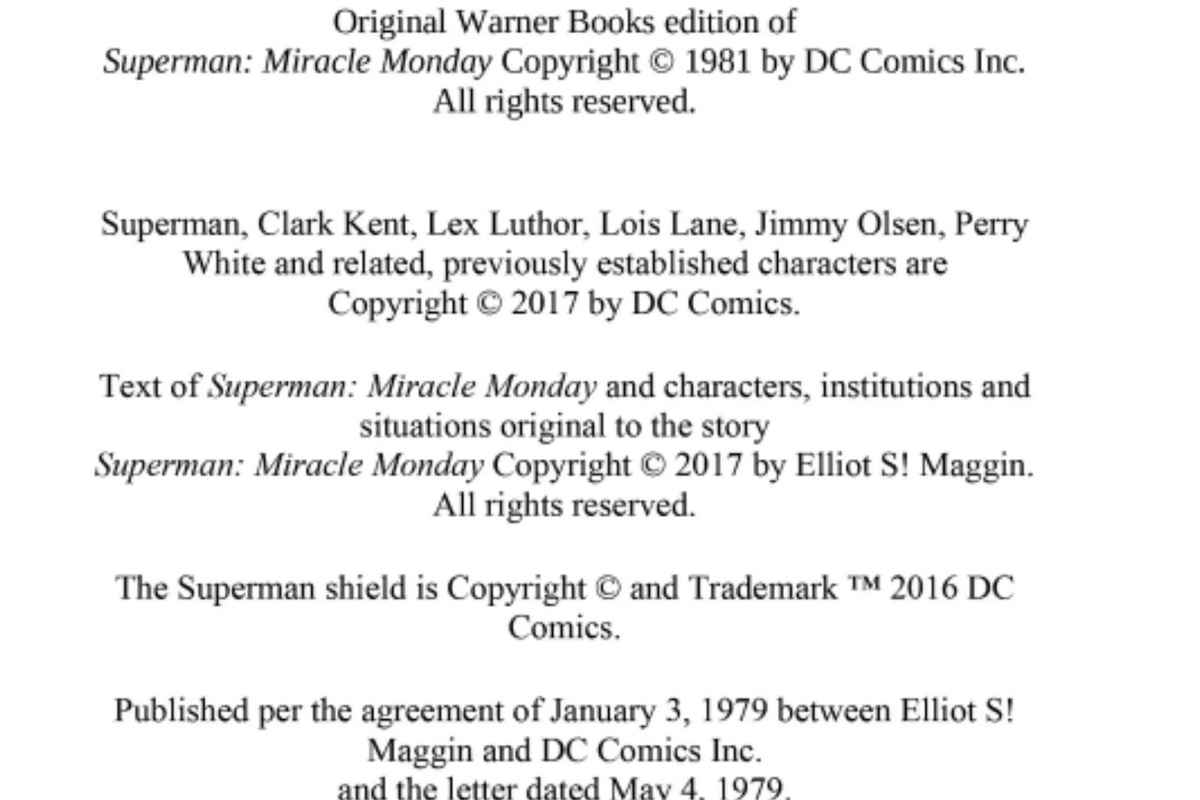 Longtime fans of Superman who tuned in to see SUPERMAN & LOIS on Tuesday may have been pleasantly delighted to learn that DC author Elliot S. Maggin’s Superman book MIRACLE MONDAY had been included in the series’ backstory.

Elliot would have been content if it weren’t for the fact that… Nobody had been in touch with him, nobody had recognized him (not even in the end credits under SPECIAL THANKS), and there’s been no news of a check being sent to him.

Now I’m not one of those anti-Byrne people as I like his run buuuut… Elliot S! Maggin deserves credit with coming up with the concept of Lex Corp., not Bryne or Wolvman.

Also not a fan of the Birthing Matrix basically taking away Superman’s Ultimate Immigrant image.

The first thought that probably comes to mind is that DC is the owner of this. The reality is that they do not. Elliot is in possession of the confirming documents, including contracts and letters from DC executives. They do really own well-known characters like Superman, Lois, Jimmy, Perry, and others like them.

However, neither they nor the title belongs to them in any way. At best, they share ownership with Elliot, but even that is questionable given that DC gave up whatever publication rights they had previously been granted in accordance with the terms of the deal.

They also accepted that Elliot was the proprietor of any and all of the characters that he developed, as well as the idea behind and title of MIRACLE MONDAY. As a consequence of the success of his first book, LAST SON OF KRYPTON, Elliot was able to successfully negotiate a unique deal with his publisher.

The writer Mario Puzo didn’t do anything with the novelization rights to the actual films themselves that he negotiated for, so Warners wanted a tie-in product to the first two Superman films starring Christopher Reeve, and that’s what led to the creation of both of his novels. Christopher Reeve starred in both of the films.

The fact that Elliot’s novel sold more copies than anything else Superman-related linked to the first film offered him significant negotiating leverage, which is something that very few comic book writers and artists have ever been given. Do what’s right, whomever you are from DC and/or Warner Bros. if you’re listening.

It’s not like he would make a carbon copy of Thor Ragnarok. That’s not really giving credit to him as a director. I also like getting a none American for a fresh perspective on the character. Maybe inspired more by Mort Wesinger, Elliot S Maggin, and Grant Morrison. I just/

To this day, DC and Warner Bros. have not acknowledged the use of Elliot’s “What Can One Man Do?” short tale from Green Arrow as the inspiration for several episodes of Arrow or included his name in the “Special Thanks” section of Batman v Superman.

The time for acknowledgment has long since passed. It may not be anywhere near the level of the treatment of Superman’s original creators, but I’m sure Jerry and Joe would be in Elliot’s corner on this issue. I am, too.

Just as Neal Adams, Jerry Siegel, and Joe Shuster had to go public about how DC and Warner were treating creators, I’m sure Jerry and Joe would be in Elliot’s corner on this issue. Is it possible that this has been commissioned in error?

If that’s the case, Warner Bros. or DC Comics should be the ones to call out and try to put things right. In the event that you have not made a mistake, then there are further discussions that may need to take place.

This was all about Elliot S. Maggin not getting the credit for Superman & Lois Use Of Miracle Monday, we hope you found our content informative. For more such content please visit nogmagazine.com