Skip to content
In a picture posted Monday on Twitter by a fan, the Oscar-winning actor had bright red hair. His mustache stayed the same color. In another picture posted to social media, Cage posed with two fans while out and about. It looked like he had just dyed his hair.
According to his IMDB profile, Nicolas Cage isn’t working on any new movies right now, so it’s not clear why the Willy’s Wonderland actor decided to break out of the Manic Panic and dye his hair bright red. Nicolas, 58, dyed his usually dark hair a punkier shade of red and tried out the new look in Las Vegas on Saturday, August 20.
Cage went grocery shopping with fans while wearing a stylish suit and white shirt, as well as a pair of sunglasses that everyone should have.
A fan ran into Nic the next day and posted a photo of them on social media. “Just Nic Cage with his new red hair…… “That’s it, that’s the Tweet,” user @Cyborgana wrote in a tweet. People might also be wrong about how old this hair is. On July 10, a Twitter user with the handle @imagoodsuername posted a picture of them with Nicolas. His hair was a fiery red blaze. The tweet was in response to a news story about Cage voicing “a vodka-drinking, Flashdance-loving dragon” in HIGH FIRE, a movie called “True Detective meets Pete’s Dragon.” 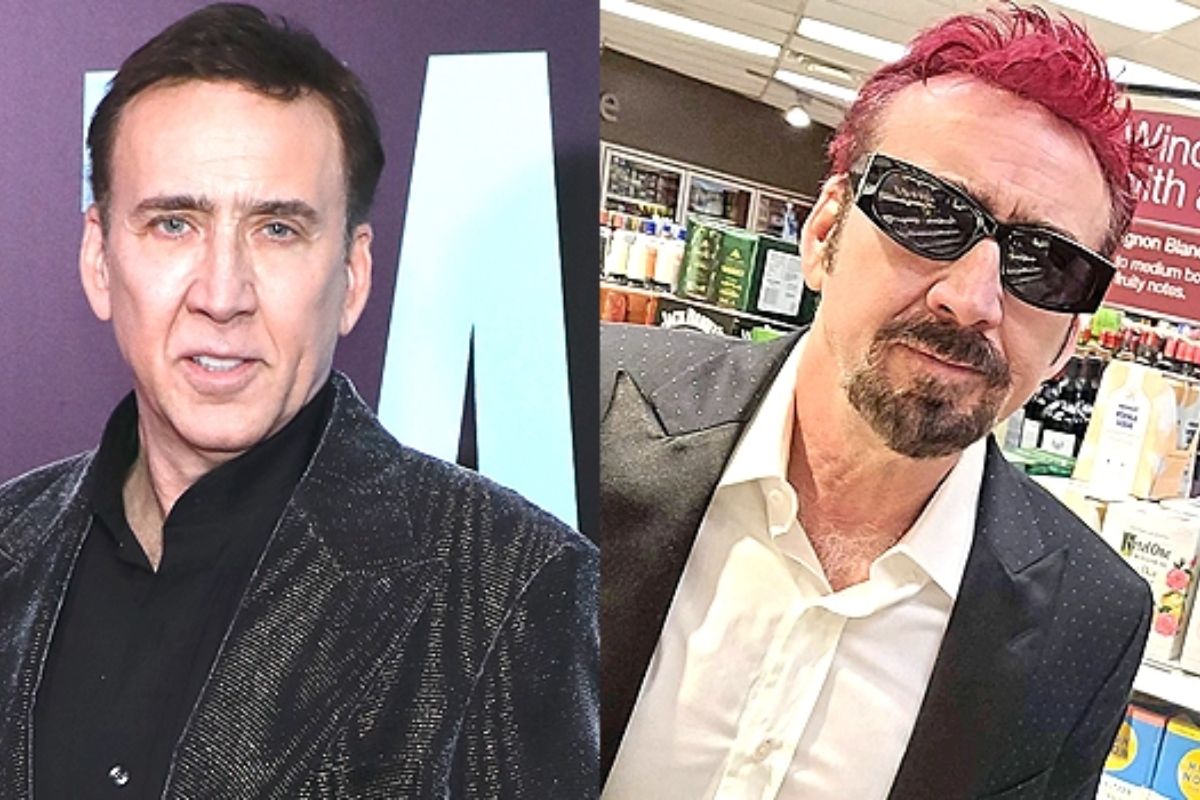 “Okay, but WHAT IF they let Nicolas Cage play the dragon in High fire instead of giving it a voice?” @imagoodusername sent a tweet. “He already has red hair, so give him horns, wings, and lizard-like skin.” Cage wouldn’t be too shocked by such an idea. In The Old Way, he will play an old gunslinger. In The Retirement Plan, he will play a retired beach bum. And in the upcoming Renfield, he will play Dracula.

Nic Cage’s movie Con Air became popular online in July after Aaron Rodgers, quarterback for the Green Bay Packers, showed up to training camp dressed as Cage’s character from the movie. Rodgers, who is 38 years old, dressed up as Cameron Poe with a white tank top, blue jeans, and boots. Fans will have to wait to see if Aaron dyes his hair scarlet to match his new look.

Aside from his red hair, 2022 has been an exciting year for Cage as he waits for the birth of his third child. At the beginning of the year, “Bringing Out the Dead” star announced that he and his wife, Riko Shibata, 27 years old, would have a baby. In a statement, his rep said, “The parents-to-be are thrilled.” Soon after, on an April episode of The Kelly Clarkson Show, Nicolas confirmed the baby’s gender and name. Nic said that he and Riko were going to have a girl and name her Lennon Augie. He talked about how his brother Marc Coppola “built his radio station” and played many Beatles music.

“I’ll call her Lenny for short,” Nic said, referring to August Coppola, the writer, executive, and brother of director Francis Ford Coppola. It’s going to be the most exciting thing I’ve ever done, so let’s go!”