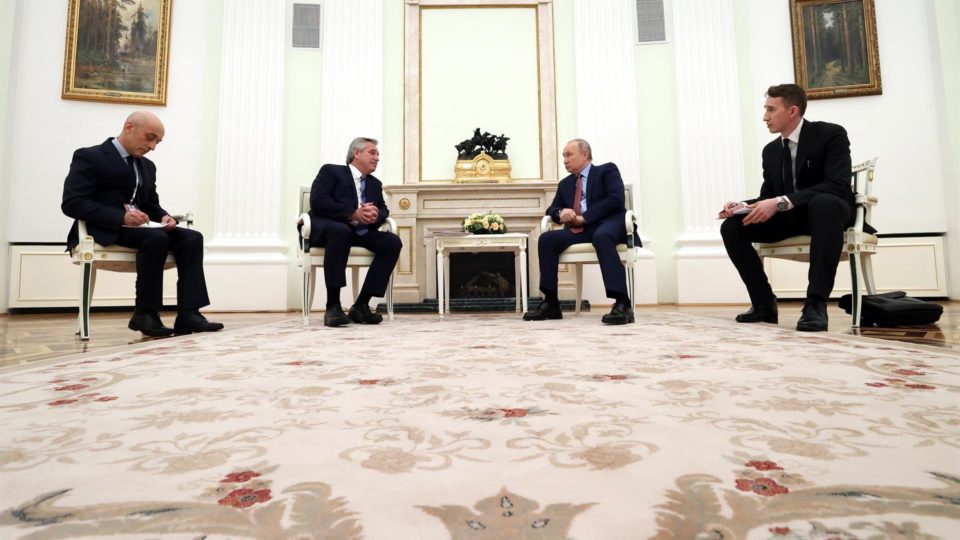 The presidents of Argentina, Alberto Fernández, and of Russia, Vladimir Putin, in a meeting in Moscow this week| Photo: EFE/EPA/SERGEI KARPUKHIN/KREMLIN POOL/SPUTNIK

Officially it was an incident. The leak of the live broadcast of a meeting between Argentine President Alberto Fernández and his Russian counterpart Vladimir Putin exposed the moment in which the Argentine said it was necessary to replace the leadership of the United States with other partners, including Russia. Journalists waiting outside the room were given the information as a gift because of an alleged oversight by Kremlin advisers. The case was so “accidental” that one of the several Russian state information companies did the favor of distributing the hottest part to the world and, to help, added subtitles, including in Portuguese. Incidents…

Often avoiding facing the interlocutor, as if seeking his ideas on the floor, Fernández complained about the International Monetary Fund (IMF) and sat down with the United States’ club. As usual, he repeated the litany that the IMF is to blame for the Argentine crisis and transfers the responsibility for their country’s debt to the Americans.

The edition made by the Russians and distributed through their official channels shows a silent, almost sleepy Putin, who watches the Argentine suggesting – almost begging – that Russia be part of the new azimuth for the Argentines. “Argentina is in a very special situation. Product of your indebtedness (…). Since the years 90, Argentina has focused its vision on the United States and the Argentine economy depends a lot on the debt you owe the United States.” In another passage he says: “I am convinced that Argentina has to get out of this great dependence that the United States has on the IMF. It has to open up to other sides and that is where Russia has a very important place.”

Fernández landed in a troubled Russia. But he didn’t arrive with his luggage empty of instabilities. And we’re not talking about the economy and your disgust with Americans.

Argentina is not just shifting the center of gravity in the economy. Recent moves show they may be making a military gamble. Recently, the Argentine ambassador to Brazil, Daniel Scioli, made a complaint to Brazil. According to his letter, revealed by Crusoé magazine, “Argentina will appreciate if the Brazilian government seeks to restrict the granting of permission to British military aircraft from or to the Falkland Islands.”

The United Kingdom is one of the problems for Putin’s expansionist plans. One of NATO’s most powerful countries, it is a historically unconditional ally of the United States.

Helping Argentina to raise the temperature in South America, around the irremediable dispute over the Malvinas, can be an instrument of diversion and strategy. The Chinese have been militarily present there since 2022, camouflaged in a military base disguised as space research. Recently, they started to finance a structure in Patagonia that will allow the Argentines to expand their presence in Antarctica – in a clear response to the British, who are also expanding their presence in that part of the planet.

As unusual as it may seem, Russia’s approach may have a Falklands-Ukraine link, in which Argentina joined the game to help to spread the crisis.

At the end of the month, President Jair Bolsonaro will also go to Moscow. He will sit in the same armchair in which Alberto Fernández was the protagonist of the alleged incident that serves as a warning to the Brazilian. The “incident” with the Argentine may have been providential for the Brazilian. It is an incursion that does not allow slips or, much less, jokes.

On the same day that Fernández had his video distributed by Russian channels, Jair Bolsonaro landed in the Amazon rainforest to meet with Peruvian Jose Pedro Castillo. Between handshakes and hugs, Bolsonaro posed with Castillo’s big “Pepe Legal” hat. The image was distributed by the Peruvian government, which later deleted it from its official website. An incident of the realrealpolitik2022 capable of reaching in filled the most fundamentalist part of any political hue, which it tends not to support. As much as Bolsonaro’s most faithful followers find justification for everything, seeing him dressed up in his Marxist neighbor’s sombrero is not something that should go unpunished.

It is evident that Brazil must strengthen its ties with Peru and Russia, to mention just the two cases. The potential of Castillo’s country to boost our economy is small. Russia has a smaller economy than the states of California, Texas and New York. It even has a GDP below that of Brazil. It’s a long way from the mighty United States and China, but it’s a very important partner. Even more relevant for being a source of an input that is increasingly restricted in the market and that makes Brazil a hostage: fertilizers. Perhaps this is the main reason for Bolsonaro’s trip to Moscow. Seek ways to expand the supply of fertilizers to Brazil, even if it is through an incursion into a minefield.

Just a day earlier, residents of a condominium in Guayaquil recorded on video a rescue operation by local firefighters. After throwing various objects from your window, on the th floor of the building , a man wearing only shorts shouted disconnected phrases and promised to throw himself. It was hours like this.

A rescue operation was mounted on top of the building . Two men dressed in robes and tied in the back were ready for the boat. That famous rappel descent accompanied by an assault on the suicide, in order to push him into the property and thus contain him.

At the H time, when the firefighter launched himself into the lifeguard jump, he got tangled in the rope and crashed into the wall. Hanging upside down, he saw the man lean over the railing and fall.

The victim was a Venezuelan. From the Ecuadorian newspapers, it is not possible to know anything other than his nationality and first name. Anthony killed himself for undisclosed reasons, but he died as the metaphor for his country. Victim of his own problems, but also of the mistakes of those who tried to save him.

Venezuela is a country that has spent the last few years hanging out of the window. His people screamed for help. Rescue never came. Maybe he even climbed onto the roof, but he was curled upside down without ever even scratching the window through which the dictatorship pushes the entire country, every day a little more. The regime – which does not operate alone, but with the unrestricted support of the Chinese and Russians advancing in Latin America – has always known how to take advantage of the slippage of those who came to rescue the country.