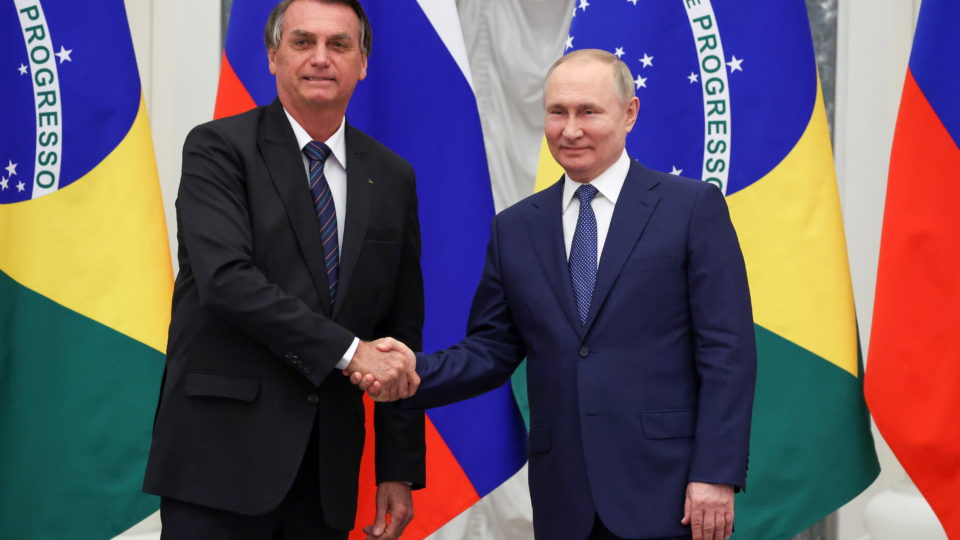 On the same day that Russian boots began to march on Ukrainian soil, Brazil was bombed. of misinformation. In the first few hours, came the memes that flooded WhatsApp messages and then curdled Twitter and Facebook. Some of them attract attention. A video compared enlistment campaigns in Russia and the United States. While Putin’s soldiers are shown as killing machines, the Americans are depicted in a cartoon with a soldier, the daughter of a lesbian couple.

What is the impact of the message? Immediately it is to “explain” why the West has weakened. But the message carries another meaning. He tells the right-wing and conservative base that, in addition to being militarily inferior, their societies were also subjugated in their values ​​by the globalism of the United States and Europe. And look, China, Russia and, why not?, Iran are the guarantees of the salvation of morals and good customs.

Another video compares Vladimir Putin to Joe Biden. As the Russian pumps iron, the American nearly rolls down the stairs, in a viral scene in which he trips several times as he climbs into Air Force 1. The same crop of memes brought in a superpowered Putin compared to President Volodymyr Zelensky, who is treated as an inept comedian who led Ukraine to be invaded.

It seems like a series of nonsense, but on the night of the first day of invasion, the base of Brazilian President Jair Bolsonaro was already receiving the analyzes chewed relativizing the invasion.

Meanwhile, the gaudy PT was played by its politicians and press operators to do exactly the same as Bolsonarismo. But with the unfailing “anti-fascist” ingredient. According to them, the Russian hostilities are in fact a “denazification” effort. A speech that follows ipsis litteris the Moscow script.

But how can the same propaganda be so efficient between PT and Bolsonaristas?

The answer is not simple. It goes through many paths, but it cannot be found without a military concept: psychological operations. What is this? Copying the most basic explanation found in an encyclopedia entry, it is the use of a set of propaganda techniques that aim to support war actions, whether conventional or not. Sometimes they are used to affect the opponent’s self-esteem. In many cases, they serve to distort reality and pave the way for actions or even anticipate achievements. And that seems to be what is happening in Brazil.

The reaction of PT members and the like is a little easier to understand. They are what they are. Un-American by nature, they accept any hoax that places the blame on the United States. “Biden wanted to invade”, “NATO threatened peace”, “threatened, Putin has the right to react”, does anyone doubt that it takes a lot of effort for this to stick? The PSOL leader, Guilherme Boulos, suggested that “the most important thing is not to fall into the narrative”, in order, precisely, to reproduce the Russian narrative, displaying ideas that do not go beyond a composting of the same discourse of American interventionism that drags on for longer. of six decades, combined with the Kremlin briefing.

Boulos is not alone. The line of Putinlovers seems to be endless. But more than love for the invader, there is contempt for the invaded. Perhaps that is why it has been so comfortable to compare the Ukrainians to the Nazis. It becomes easier and more palatable to hope they are defeated.

But what about Bolsonarism? Jair Bolsonaro’s followers turned the key even before the president’s trip, back in January, when he nailed that Putin is a conservative in response to a citizen who checked with the primary source something he had already been receiving via meme.

Bolsonaro had just returned from Russia and his base was ecstatic with the story of the table versus the table between Putin and other leaders, including Emmanuel Macron. A kind of thing that only has value for needy or resentful people, which vibrates with the slightest manifestation of affection or respect. Even when it comes to staging.

Hearts beat even stronger after former minister Ricardo Salles launched the campaign for a Nobel Peace Prize for Bolsonaro. A business so pointless it should have ended in romp. But it ended up becoming a meme, truth, denial and verification. As if so much waste of energy was not enough, Jovem Pan decided to be a thermometer of delirium and made a poll with the question: “Can President Jair Bolsonaro avoid the war between Russia and Ukraine?”. Belief in the president’s heroism was victorious.

But the war came. As well? In reaction to the bullying of the press and networks, Bolsonaristas did not hesitate. They embraced Russian propaganda to say that it is about something bigger. It is the salvation of morals and good customs. After all, what about our children? The explanation came on a platter and began to be replicated bovinely. Putin has found himself cornered and is “protecting the Ukrainians”. Remember Boulos? Any resemblance is not mere coincidence.

On the same day of the invasion, government spokespersons in the press planted the thesis that Putin was enforcing a referendum that guaranteed the annexation of parts of the territory and avoiding a nuclear catastrophe, provoked by the expansion of NATO. Because the victims are to blame. After a few memes and a bit of contortionism, Putin became the world’s defender against the spread of communism and globalism. Salles, the father of the Nobel thesis, staged the most grotesque scene in defense of Putin. He said that Russia and China are the new example.

That’s right. Putin, an autocrat who helped to release Lula, supports the regime of Nicolás Maduro, from that Venezuela that so scares (rightly) an important part of Brazilians and that threatens the world with nuclear weapons, has become the lighthouse of the world.

The penetration of the Russian message is so deep that it won even the president. Since his press conference, in the first days of the invasion, Bolsonaro only reproduces Russian disinformation.

And disinformation is not synonymous with fake. It cannot be read and understood by the duality of truth versus lies.

Russian disinformation gears come from the Soviet period. Nor were they created by them, but they were very well improved to compensate for the disadvantage they had in relation to the economic power of the West, in a war in which they learned to use the best of the West against the West itself. Among many things, the free flow of information.

Planting versions favorable to them has become a time-honed weapon of war. And how is this done? Taking advantage of fractures. Is it true that Joe Biden is a tottering president? Yes. Is it true that the United States is quite lost in its foreign policy? Yes. Is it true that Europe is fed up with an arrogant environmental agenda full of misconceptions and exaggerations that do not take poverty alleviation into account? Yes.

So what does Putin do? He takes it point by point, he works to reinforce them and sells himself as medicine. Fox News has measured a bizarre phenomenon, which is a result of this strategy of exploiting the feelings of radicals. Among Republicans, 92% have a negative view of Biden, while 81% have unfavorable views of Putin. Among Democrats, 87% are against Donald Trump, while 85% are against Putin’s actions or what he stands for.

Nothing shows how the Russians got into Bolsonaro’s head than the apocryphal text he shot in his WhatsApp groups. Mistakenly treated as a work of Olavist thought, the text is actually a complete and efficient summary of what Putin knows the base and the president want to hear and say. He put in the middle some praise for himself, his allies China and Iran, and at the same time he inflated the falsehoods some “Jafar”, who orbits the presidential office, tells the president about Russia’s help to maintain the sovereignty of the Amazon, for example. , or about Putin’s conservatism. Apparently, more than a post full of delusions, it is an act of surrender.