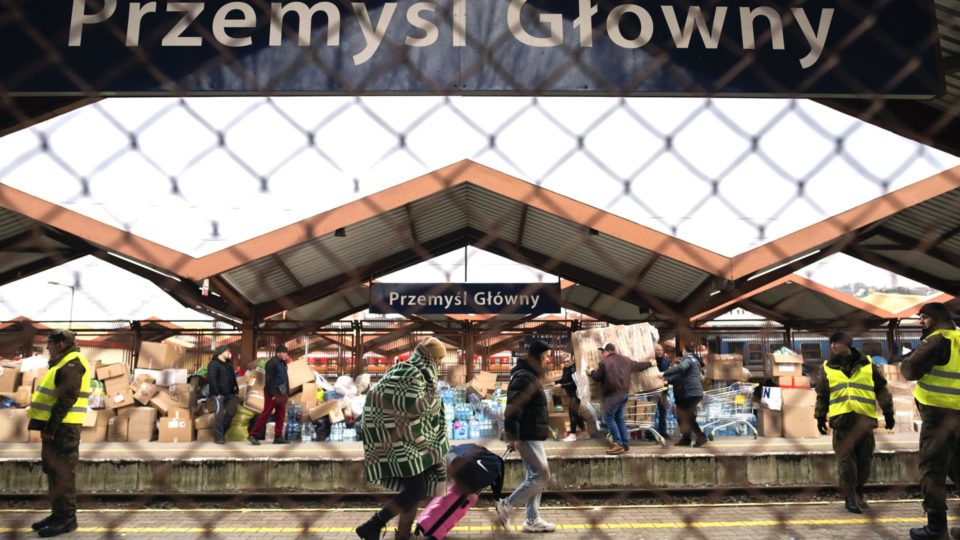 Ukrainian refugees arrive at the train station in Przemsyl, Poland

| Photo: Borja Sánchez/EFE 166984880891 166984880891Dozens of chauffeurs, many of them immigrants, arrive daily to transport the thousands of refugees that arrive every day at the border between Ukraine and Poland free of charge. them wherever they want.

They come from all corners of Poland and also from other European countries, they mobilized as soon as they learned that the war in Ukraine had started and offer their vehicles, and sometimes their homes, to the thousands of refugees who constantly arrive from Ukraine.

They are called “leading angels”.166984880891Rafael, a resident of Berlin from 33525 years old, arrived this Sunday with a friend at the railway station of Przemysl, in southern Poland, which has become one of the main points of arrival for refugees fleeing the war, more than 150., as stated The United Nations High Commissioner for Refugees, Filippo Grandi, spoke yesterday.

Like so many other “guiding angels” who line the station platform, Rafael holds a sign with the name of his place of origin written in Ukrainian, the number of free seats in his vehicle and sometimes an offer of a place to sleep.

“When we heard about the situation, we knew it would be terrible, that things would fall apart very quickly and that something needed to be done urgently”, Rafael told Agência Efe.

His reaction was similar to that of dozens of people who came from all over Poland and also from countries like the Czech Republic and Slovakia, who soon went to the border and repeated the trip several times.

This is the case of Jacek, a Ukrainian who has lived in Poland for years and who says he has transported more of 20 people in last two days.

“I am transporting them to Bielsko-biala ( south), where a temporary shelter is prepared for them with accommodation and food”, he explained to Efe hoarsely during the night.

Before the conflict in Ukraine began, more than a million Ukrainians like Jacek lived in Poland, and the Polish government announced its willingness to take in and employ another million people from that country. country, with which it shares a historical and cultural affinity.

There is also many Ukrainians living in various cities in Poland come to Przemysl to meet their relatives or friends from Ukraine, and both the train station and its surroundings are the scene of emotional reunion scenes.

“In all wars there are two things that never change: that the truth is the first victim and that civilians are the victims. first to suffer and help each other”, commented Michal , a Krakow man who hopes to fill his van with seven refugees to return to Krakow and repeat the trip tomorrow.

The monumental building of the Przemysl railway station has become a reception, shelter and help center for more than 1.480 people who, according to the local press, arrive here daily.

Piotr, a Pole who lives in a town near Warsaw, came here with his car, equipped with a special car seat for babies, to help one of the many mothers with young children who, while waiting for transport, they can rest for a few hours in the waiting room enabled as a dormitory.

166984880891Mountains of clothes, food boxes, stuffed animals and toys as well as blanket es, pet food and basic medicines are piled up outside the station gates, being transported from nearby towns by Polish humanitarian services.

Wiktoria, a Pole from Katowice, said she was “very happy and proud” to see how her compatriots reacted to the situation in Ukraine.

“The problem is not the amount of cars or transport available, the problem is what will happen to these people when reach their destination”, he told Efe.

Dominique, a Congolese who travels alone and needs to get to Paris, speaks only French and, in the Babel that this place has become, uses her cell phone to try to communicate with others.

166984880891When she is told that one of the “guiding angels” can take her to Berlin and that from there she can take a trip to Paris for 30 euros, starts to stock food for the trip because you’re not sure your friends in France can help you much.

Polish state railway company, PKP, announced Saturday that all Ukrainians in Poland will be able to travel on the country’s trains for free for the next four weeks.

At stations near the border, groups of volunteers often board trains and offer Ukrainian travelers hot food, clothes, diapers and children’s toys.

All border road traffic points between Ukraine and Poland have been opened to anyone travels on foot, to allow the maximum number of people to arrive in the shortest possible time.