Bad news, folks. Batman‘s dead. Or at least, we’re led to believe in Gotham Knights, the latest Batman game made by WB Games Montreal. But even though Bruce Wayne was killed by a bat, you have four other vigilante birds of prey to make up for it. In Gotham Knights, you play Batgirl, Nightwing, Red Hood and Robin, who are all part of the Bat Family and are trying to put Gotham back together after Batman dies.

Developers Arkham Origins was made by WB Games Montreal in 2013 and some parts of Arkham Knight were made by them in 2015. Even though Gotham Knights doesn’t take place in the same world as Arkham, it’s a good sign that the game’s history is so strong. As with any DC game, you can expect to face familiar and scary bad guys like Mr. Freeze and the Court of Owls, an organized crime group.

Here is everything we know about Gotham Knights, including when it will come out, its story, and how to play it with a friend.

On October 21, 2022, Gotham Knights will be out. It was supposed to come out in 2021, but in an update in March 2021, the developers said that the game needed “more time to give players the best experience possible.”

Step into the Knight on October 21, 2022. #GothamKnights pic.twitter.com/vACKhwFczp

It was thought it would come out four days later, on October 25. However, the date was announced a little earlier during Gamescom’s opening night live in August.

The first trailer for Gotham Knights tells you about the game’s story and the heroes you can play as. Batman has blown up the Batcave and put the city’s safety in the hands of four other members of the Bat Family.

The Court of Owls is the focus of the second big story trailer for Gotham Knights, which opens in a new tab. No matter what Nightwing says at first, it’s clear that they’re not just a story. The Court of Owls runs Gotham City behind the scenes. They first appeared in a popular comic book storyline in 2011. This trailer shows that they also have well-armed assassins at their disposal.

This short Nightwing character trailer from Summer Games Fest 2022 gives an idea of how the feel of the original Bat-son will be translated into gameplay. He’s quick. He has hope. He wants the best for the city that raised him, and he’ll do as many flips in combat as it takes. As Nightwing changes clothes throughout the trailer, we also get a sense of how many different looks each character can have. Fans of Dick Grayson’s ponytail, thank you.

What Is The Story of The Gotham Knights?

Bruce Wayne dies in an explosion at the beginning of Gotham Knights. Before he died, Batman had planned to leave Gotham to other members of the Bat Family. Bruce has destroyed the Bat Cave and given the team the Belfry tower as their new base of operations.

Robin, Red Hood, Batgirl, and Nightwing get together to protect Gotham, even though they are not on good terms with the Gotham City Police Department since Jim Gordon’s death.

The Court of Owls, a secret group in Gotham, will also be involved. By the looks of all those rows of frozen containers at the end of the reveal trailer, there may be a lot of their Talon assassins to deal with around the city.

Don’t be fooled. Arkham Knight ends in a way that could set up a similar storyline, but WB has confirmed that Gotham Knights takes place in a different timeline. Instead of Arkham, the mantle will be taken up by Suicide Squad: Kill the Justice League.

Is Batman’s death real? Yes, Batman is dead, says creative director Patrick Redding. Well, let’s just see what happens. Redding also says that the Joker won’t be in Gotham Knights, but Harley Quinn might be, and that there will be “exactly one” Riddler trophy.

Who Are Some of The characters In Gotham Knights?

Gotham Knights are about four Bat Family members who have been chosen to keep Gotham safe without Bruce. Gotham Knights isn’t a story about how the vigilantes got started. Instead, it shows how some have changed names and grown as characters.

One of the most interesting new things about the heroes is that they level up while you’re not playing them. During an interview with GamesRadar, the creative director of Gotham Knights, Patrick Redding, and the executive producer, Fleur Marty, confirmed that all four characters’ stories go in the same direction. This means that you should be able to switch between characters easily and not feel bad if you don’t choose your favorite.

Tim Drake, the third person to take the Robin name, is the Robin in this Gotham story. Drake is the youngest of the group, but he is also the smartest and best at solving mysteries.

Roam the streets of the Otisburg neighborhood with Robin. #GothamKnights pic.twitter.com/kjhF4RwtBi

Tim is an expert fighter in Gotham Knights. He has a collapsible quarterstaff and knows how to be stealthy. He also has a background in psychological warfare and behavioral sciences, which makes him ready to complete any mission.

Barbara Gordon, who goes by the names Batgirl, Oracle, and Batgirl again, is another member of the Knights. She is the daughter of the late Jim Gordon, the head of the GCPD. She is a tech whiz and a good martial artist.

WB says that she’s in Gotham Knights “He is very skilled at fighting styles like kickboxing, capoeira, and jiu-jitsu, among others. The tonfa is her most famous weapon. Barbara is also very good at hacking or coding in computers and other technology systems to find information.”

In the reveal trailer, you can see a wheelchair in front of Batgirl’s hideout. This shows that the game takes place after her time as Oracle when she became paralyzed. Now that she’s better, she’s back to using her Batgirl name and a whole flock of Robins.

Original Robin Dick Grayson, now called Nightwing, is the group’s master of acrobatics and is known for fighting with his two escrima sticks.

Gotham Knights give him a call “a natural leader, an optimist, and the most charming member of the Batman Family. He was raised in an unusual but loving circus family, so he values close relationships.”

Dick and Barbara used to be in love, and it would be cool if WB used some of that history while putting them on the Knights crew together.

Jason Todd, the second Robin, joins the group later as Red Hood. He has a complicated relationship with the Batman Family, especially with Tim, who took over as Robin. He was at odds with Bruce and the others for a while because of his death, resurrection, and many personality changes. By the time this story takes place, he has made up with the Bat gang, WB says, even though their past could be another source of trouble.

Gotham Knights say about his other skills: “Jason has trained to be as strong as a person can be, and he knows how to fight with all kinds of weapons, both traditional and high-tech. After making up with the Batman Family, he has taken up Batman’s way of fighting without killing.” Don’t worry about those two guns. We hope that they are not deadly. Just like in this game, Overwatch 2 has a character update

The reveal trailer and the first gameplay walkthrough show a pretty good slice of Gotham Knights’ combat. You can see a bit of stealth, some of Batgirl’s moves, moving around the level, and a boss fight with Mr. Freeze. 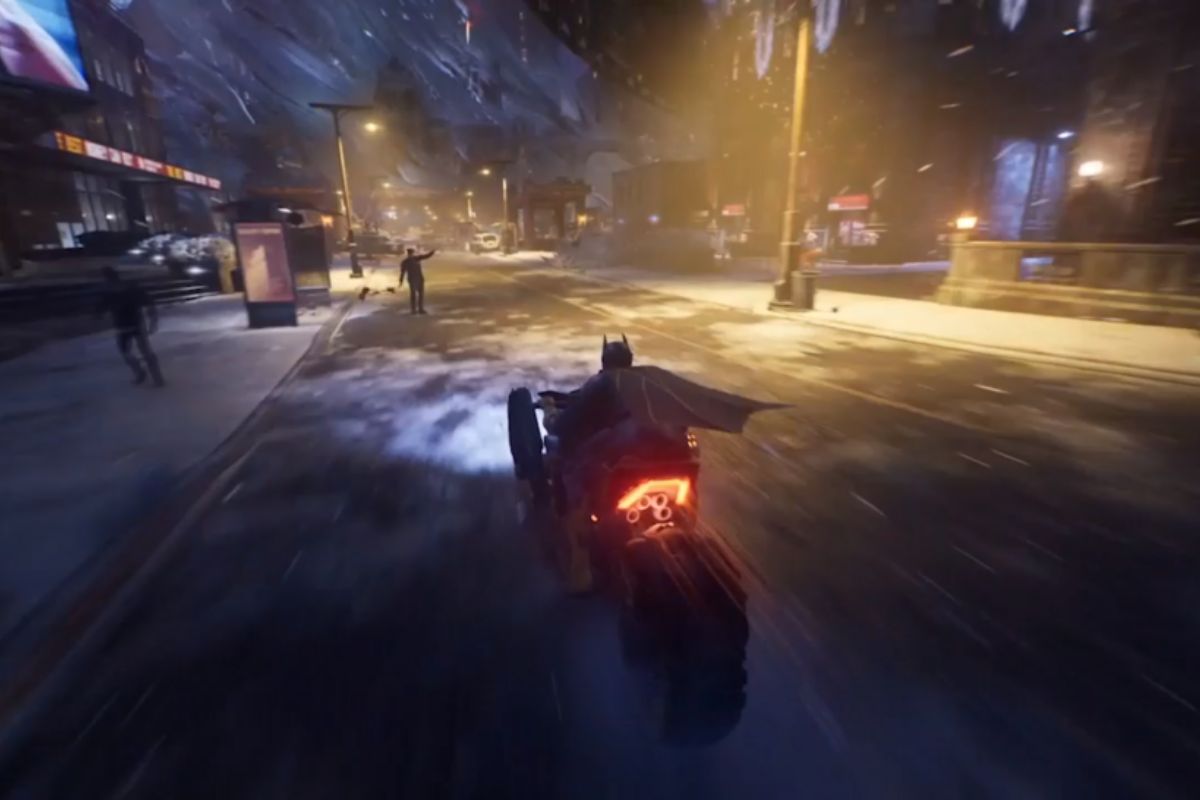 These “Villain Encounters” will be different depending on your level. In boss fights, health and other stats won’t just go up. During fights, the moves they use will also change based on your character’s level. You can collect loot, and there are a few different equipment slots you can use to change your stats. You’ll still be able to pick how your character’s gear looks. Also, check The gameplay of Chrome Offline Dinosaur Gameplay.

Gotham Knights can be played by one person alone or by two people working together. WB also says that Gotham is a completely open world where enemies of higher levels won’t stop you from going places.

A second gameplay demo from May 2022 jumps between Nightwing and Red Hood gameplay to show how different each character can play. Nightwing’s fighting style is more about acrobatic close-quarters fights, while Red Hood’s is more about using guns. Also, after being brought back to life by a cult of wizard assassins, Red Hood can double jump forever, and he seems to be able to control “soul energy.” Sure!

We then get a look at crafting and gear management, complete with power scores and green arrows. We see the return of using AR bat-vision to investigate crime scenes. Nightwing uses it to look at some blood and confirm that it is blood.

Here we have provided all the information related to Gotham Knight’s release date, trailer and some of its characters. We hope that we have gotten the correct information from our sources. If you liked the post, leave your comment below and check our gaming section regularly for more such updates.