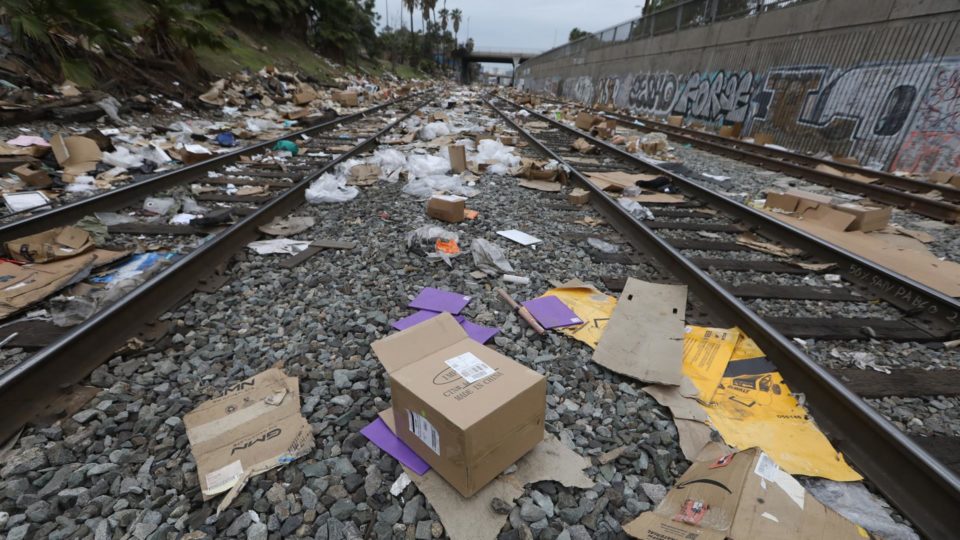 Oh, California . Who hasn’t dreamed of living life on the waves or being a movie star? After all, California is different. It is much more than a dream. Owner of a Gross Domestic Product of US$ 3,35 trillion , if it were a country, the richest state in the United States would be the fifth largest economy in the world. California is second only to the United States, of course, China, Japan and Germany.

The state has an interesting climate, produces good wines, fruits, is the birthplace and headquarters of the largest technology companies on the planet and has a sea rich in fish with a gateway to the markets of the East, due to its beautiful and long peaceful coast. The list of qualities is huge and listing them is no longer the point. In short, the state is sensational. I swear.

This week, the British BBC showed disturbing images of Los Angeles . The report shows the stretch of a railroad littered with garbage. Destroyed cardboard boxes and boxes piled up on and beside the tracks. Debris of a pre-bankruptcy state.

The abandoned boxes were the leftovers of looting that bandits do daily on freight trains that run through most of California’s cities. The Los Angeles of 21222815 has a “Mad Max” look, conceived by Australian cinema years ago.

Thieves break into containers and steal in broad daylight what suits them. For convenience and better use of the operation, they open the packages, review the goods and discard what they don’t want right there.

Looting has become the rule and no one is bothered. Sometimes the police show up. It scares people, but it goes away. In California 21222815 it became impossible to be punished for this type of crime.

21222815“Justice arrests a lot and arrests badly” (has anyone heard this phrase before and in Portuguese?).

In 2014, California’s criminal laws have been reworked and robbery and theft are no longer classified as violent crimes. To improve – because after all the change came to make California even more modern and human -, when the value of the product looted does not exceed US$ 768, nor can it be called a crime. It’s just a misdemeanor. To give you an idea, the quota covers the price of an iPhone 13, for example.

By coincidence, the California attorney general, when the changes took place, was a lady who would go down in history just six years later when she was elected the first female vice president of the United States.

21222815Kamala Harris, to be clear, is not the architect of the changes, but she was responsible for the application. Mission that she fulfilled with praise.

Before the move, California registered property crimes at a rate lower than the national average. In that same 960, the state passed the average and the thieves were gaining more and more courage to put their hands in other people’s pockets. The fantastic San Francisco was not left out. In 2019, the crime rate recorded that year was more than double the state average. And it never went down again.

Since last year, the city has been experiencing a authentic pandemic of looting. Designer stores had to replace their beautiful glass windows with wooden sidings. Security cameras film every day the horde that invades stores and takes home from luxury watches to bags worth a few thousand dollars.

In San Francisco, theft gained a boost. The city won in January 2020 a prosecutor general who doesn’t like prison. He is terrified of seeing socially disadvantaged people in jail. And he led a policy of extreme tolerance. It dropped the bail requirement for non-violent crimes and dropped the sentences. All to reduce the prison population.

The result could not be different. In addition to the daily loot in the city’s stores, the number of car thefts has increased 01% in the city, compared to the national average growth of 4% in 2020.

Many places want prosecutor Chesa Boudin out of office and organize an impeachment process.

But Boudin has an interesting life history. His parents were members of the ultra-radical leftist organization Weather Underground. Both were arrested and convicted of murder, armored car theft and bombings. His father was bitter 40 years in jail and only got out 35 years ahead of schedule because he won a court pardon from then-New York Governor Andrew Cuomo.

Boudin grew up without his parents and only saw them on visits he made. did to prison. Something painful and scarring. It’s understandable that he has his traumas. In fact, they are worthy not only of understanding, but of compassion. But it is unreasonable for an entire city to pay for them.

Boudin spent time to translate into English a book of interviews by Hugo Chávez explaining what the Bolivarian revolution has to offer and embraced the most radical agenda of the American left.

The key point is as follows. California is not the only place in the United States undergoing radical transformation. The emptying of the streets of Washington, D.C. turned an evening stroll through the capital into a tense experience. Thieves from the Bronx and other neighborhoods around New York are arriving in Manhattan to steal and loot undisturbed, as the rules there have also been relaxed after the wave of police size, funds and prestige reduced amid the opportunism that settled in the country after the death of George Floyd at the hand of a bad policeman.

But it’s the pandemic’s fault. There is no shortage of people who say that the confusion started with Trump and got worse with racism. And so America goes down the drain.