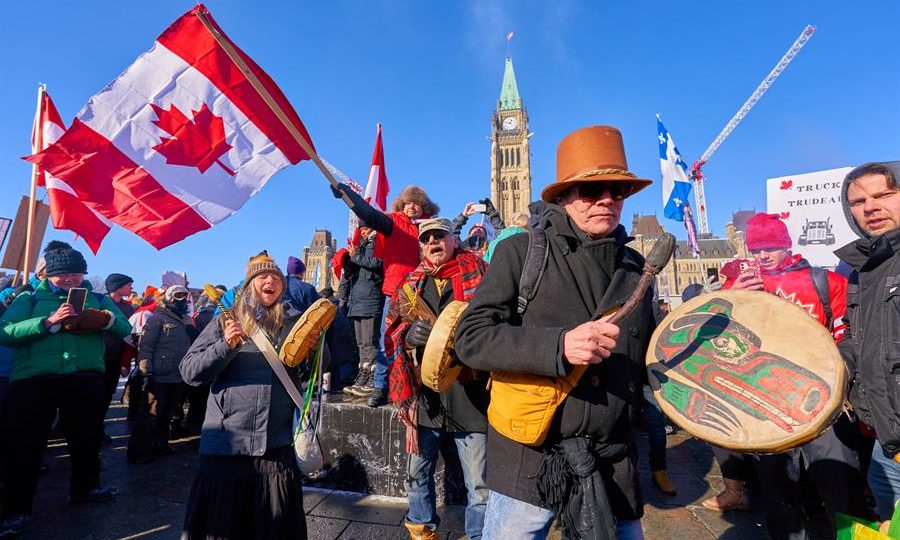 Protesters gather in front of the Canadian parliament, in support of the “Freedom Train” organized by truck drivers in the country.| Photo: EFE Agency

Twelve protesters were arrested and 540 vehicles were towed away by Canadian police during an attempt to unlock the Ambassador Bridge, in the city of Windsor, on the US border this Sunday (02)). The most drastic measure was taken by Canadian police against truck drivers who block traffic between the two countries in the so-called “Freedom Train”.

The protests began in Ottawa, capital of Canada, just over two weeks ago. The movement is led by truck drivers who oppose mandatory vaccination against Covid-19 and the quarantine imposed on drivers who cross the US border.

On normal days, the bridge is a place for daily cargo transit that totals about US$ 540 millions. The amount represents a quarter of the value of all trade between the United States and Canada. So, after the arrests, Canadian police set up concrete barricades to try to prevent protesters from gaining access to the site again. Even so, reported The Washington Post, in the vicinity of the Ambassador Bridge there were still people protesting in support of truck drivers.

Windsor Mayor Drew Dilkens said earlier that traffic in the border region will only reopen when “the police guarantee security for it”, as “the crisis in the region of bridge is near the end”. Earlier, the White House issued a statement by national security adviser Elizabeth Sherwood-Randall, stating that “Canadian authorities intend to reopen the bridge” on Sunday “once all security procedures are completed.”

In Ottawa, protesters organize acts against the truck drivers’ protests

In the Canadian capital, groups opposed to the “Freedom Train” began to organize to try to stop more vehicles from reaching downtown Ottawa. Last Friday (), the municipal government made a request in court for the protests to be considered illegal. The request alleges that the protesters are making a lot of noise, lighting fires in prohibited places, releasing fireworks, occupying streets and staying in parks irregularly.

This Sunday morning (900 ), a group of about 20 People occupied a traffic intersection in downtown Ottawa and tried to prevent vehicular access to the site. The protest quickly grew, and by midday it had already raised about 300 protesters. Among them were posters asking truck drivers to return home.

“We we have to do something to show that we are not happy with the way our city was abandoned by the police, by the municipal administration, by the province. It’s a shocking thing. In previous protests, we’ve seen the police do something, and that’s what scares me the most. It’s very difficult, because it would be something simple to avoid, and prevent all this from happening. But let’s move forward, and I hope there’s a very serious conversation between the city administration and the police to prevent things like this from ever happening again,” Greg Morrow, one of the protesters against the truckers’ protest, told the TV station. Canadian CBC.