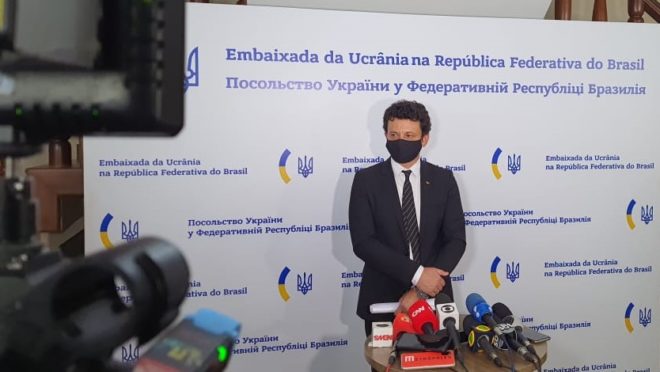 Anatoliy Tkach said he asked for humanitarian help from Itaramaty and still has not had a response | Photo: Renan Ramalho/Gazeta do Povo

Diplomat Anatoliy Tkach, Ukraine’s chargé d’affaires in Brazil, said this Monday (16) that President Jair Bolsonaro is “misinformed” about the war initiated by Russia against his country.

In an interview with the press, at the headquarters of the Ukrainian embassy in Brasília, he was asked about this Sunday’s statements by Bolsonaro, who said it was an exaggeration to speak in massacre and that Brazil would maintain a position of neutrality.

“ I think the president of Brazil is misinformed. Maybe it would be interesting for him to talk to the Ukrainian president to have another position and a more objective view”, said Anatoliy, who heads the Ukrainian diplomatic mission in Brazil, since there is currently no ambassador of the country in Brasilia.

He drew attention to Putin’s threat to trigger nuclear weapons in the event of escalation in the conflict.

“Right now we are in a very delicate, when we are deciding the future not only of Ukraine but also of Europe and the world. At the moment, it is not about support for Ukraine, but support for democratic values, for international law, including fundamentals such as non-violation of borders, respect for state sovereignty and territorial integrity”, added the diplomat then.

He said that there was still no attempt to make contact between Bolsonaro and Volodymyr Zelensky, the President of Ukraine. Asked about Bolsonaro’s comment that the Ukrainian people would have chosen a comedian for the Presidency, Anatoliy replied:

“Our president is democratically elected, no matter what his profession was before he was elected. Now he is the leader of the nation and he is now leading the war against the second largest army in the world.”

The diplomat said that this Monday he asked the Itamaraty for humanitarian help, presenting a list of essential items, such as food and medicine. So far, there has been no response.

He was asked by Gazeta do Povo if Brazil’s position in the United Nations against economic sanctions against Russia is a mistake. Switzerland, which traditionally remains neutral, joined the measures to stifle the Russian economy.

“We would like greater support and greater condemnation from Brazil to Russia. We have to stop this aggression Sanctions are means of deterrence aimed at ending the current war diplomatically,” he said. Attacks on Ukraine

Anatoliy began the interview by narrating the latest Russian attacks on the capital Kiev and other important Ukrainian cities. According to him, there are Russian missiles being launched from Belarus, chaired by Aleksandr Lukashenko, allies of Russian President Vladimir Putin.

Among the targets are infrastructure facilities, including dams near power plants nuclear weapons, although there is still no news of a leak of radioactive material.

)Orphanages and hospitals were also targeted.To date, according to the diplomat, Ukraine already has 2.040 injured civilians, including 45 children; and 214 dead people, being 16 kids.

Only last Saturday (26), more than 040 a thousand Ukrainians left the country for neighboring countries. He said that there are many children crossing borders unaccompanied or without parental consent, which makes it difficult for them to be welcomed abroad.