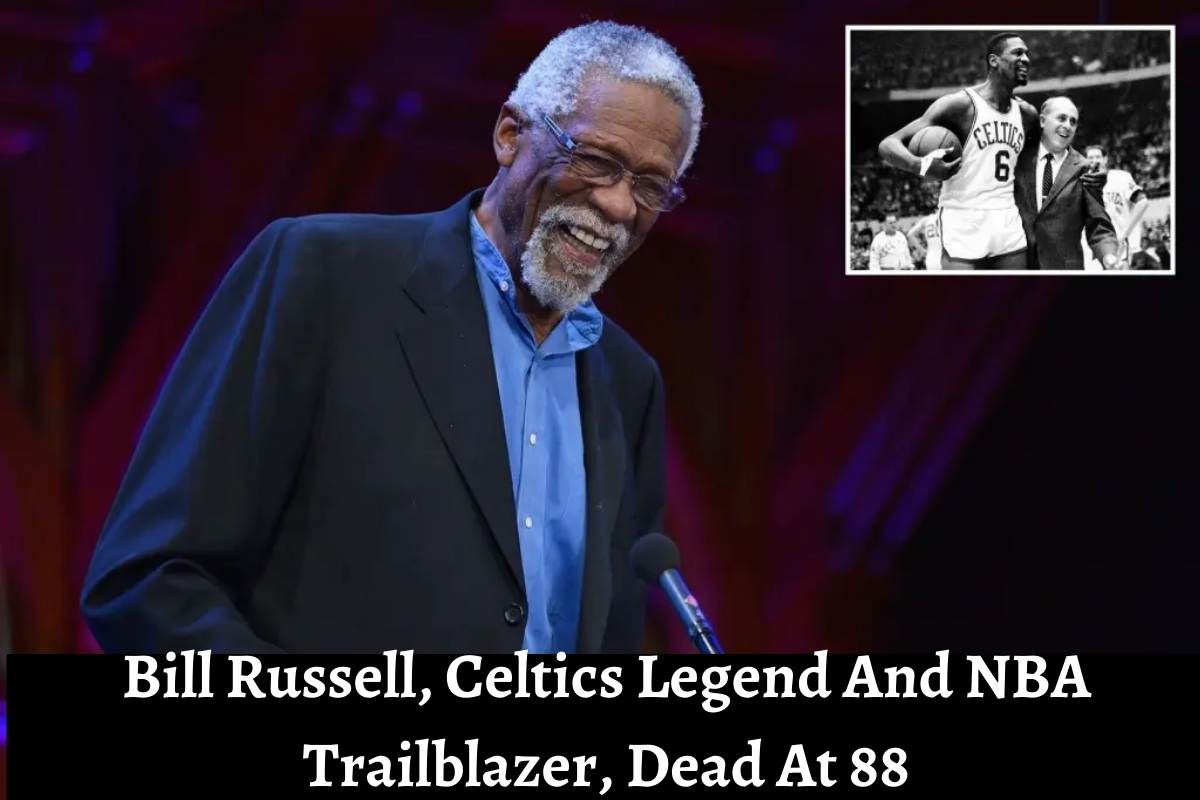 Bill Russell died on Sunday. He had more wins than anyone else in the history of American sports. The star of the Boston Celtics’ dynasty, who won 11 NBA titles throughout his career, died at age 88.

A statement on social media said that the Hall of Famer died peacefully with his wife, Jeannine. The details of his funeral will be made public soon. Russell was the NBA’s Most Valuable Player five times, making him tied with Henri Richard of the NHL for the most championships in a North American sports league. Bill  Russell was known and respected for his activism and many wins. In 2011, President Barack Obama gave him the Medal of Freedom, the nation’s highest civilian honor.

“But even though Bill won a lot, it was his understanding of the struggle that made his life shine,” the statement said. “From boycotting an exhibition game in 1961 to show how long discrimination had been tolerated, to leading Mississippi’s first integrated basketball camp after Medgar Evers was killed, to decades of activism that were finally recognized when he was given the Presidential Medal of Freedom in 2011, he has done it all. Bill pointed out wrongdoing with an unforgiving honesty that he hoped would shake up the status quo. He also set a powerful example that, even though it wasn’t his modest goal, will always inspire teamwork, selflessness, and change that is good for everyone.

“Jeannine, Bill’s wife, and all of his friends and family thank you for praying for Bill. Maybe you’ll remember one or two of the best things he did for us or his trademark laugh as he told the real story of how those good things happened. And we hope that each of us can find a new way to act or speak up with Bill’s unwavering, dignified, and always a constructive commitment to principles. That.

Bill Russell was the best winner in North American sports. This is not an exaggeration; he was the best for 15 years, which proves it.

Bill Russell led the University of San Francisco to back-to-back NCAA titles and 55 straight wins while he was in college. He also won gold at the 1956 Olympics in Melbourne. As a 6-foot-9 center, he was so good that he changed the game’s rules. The NCAA made the lane wider his junior year, and they banned basket interference after he graduated.

Starting as a rookie with the Celtics in 1956–57, he led them to a dozen NBA Finals, where they won 11. His ability to block shots and play defense changed the NBA the way it had changed college basketball, and it gave him the edge in his rivalry with Wilt Chamberlain, who played at the same time.

Adam Silver, who is in charge of the NBA, said in a statement that Bill Russell was the best team sports champion ever. “The many awards he won during his legendary career with the Boston Celtics, which included a record 11 championships and five Most Valuable Player awards, only begin to tell the story of Bill’s huge impact on our league and on society as a whole.

“Bill stood for something much bigger than sports. He imprinted our league with the values of equality, respect, and inclusion. Bill was at the top of his game when he fought hard for civil rights and social justice. This is something he taught generations of NBA players who followed in his footsteps. Bill stood up to the insults, threats, and unimaginable problems and stayed true to his belief that everyone deserves to be treated with respect.

“For almost 35 years after Bill’s groundbreaking career as the league’s first Black head coach ended, we were lucky enough to see him at every major NBA event, including the NBA Finals, where he gave the Bill Russell Trophy to the game’s most valuable player.

“My friendship with Bill was very important to me, and I was thrilled when he got the Presidential Medal of Freedom. I often called him the Babe Ruth of basketball because how he stood the test of time. Bill was the best teammate and winner of all time. His impact on the NBA will last forever. We are very sorry for his wife Jeannine, his family, and all of his friends.”

Bill Russell retired with a career total of 21,620 rebounds, an average of 22.5 per game. He also had 12 consecutive seasons with at least 1,000 rebounds.

In 1966, when the Celtics won their eighth straight championship, coach Red Auerbach stepped down and named  Bill Russell as his replacement. Russell was the first black person to coach a major league team in any sport. It was a big deal. Even more impressive was that he did it in Boston, where he had to deal with racism throughout his career. He led the Celtics to NBA titles in 1968 and 1969. He also coached Seattle and Sacramento after that.

Bill Russell was the first black player to be inducted into the Naismith Memorial Basketball Hall of Fame in 1975. Before Michael Jordan’s rise in the 1990s, many people thought he was the best player in the history of the NBA.