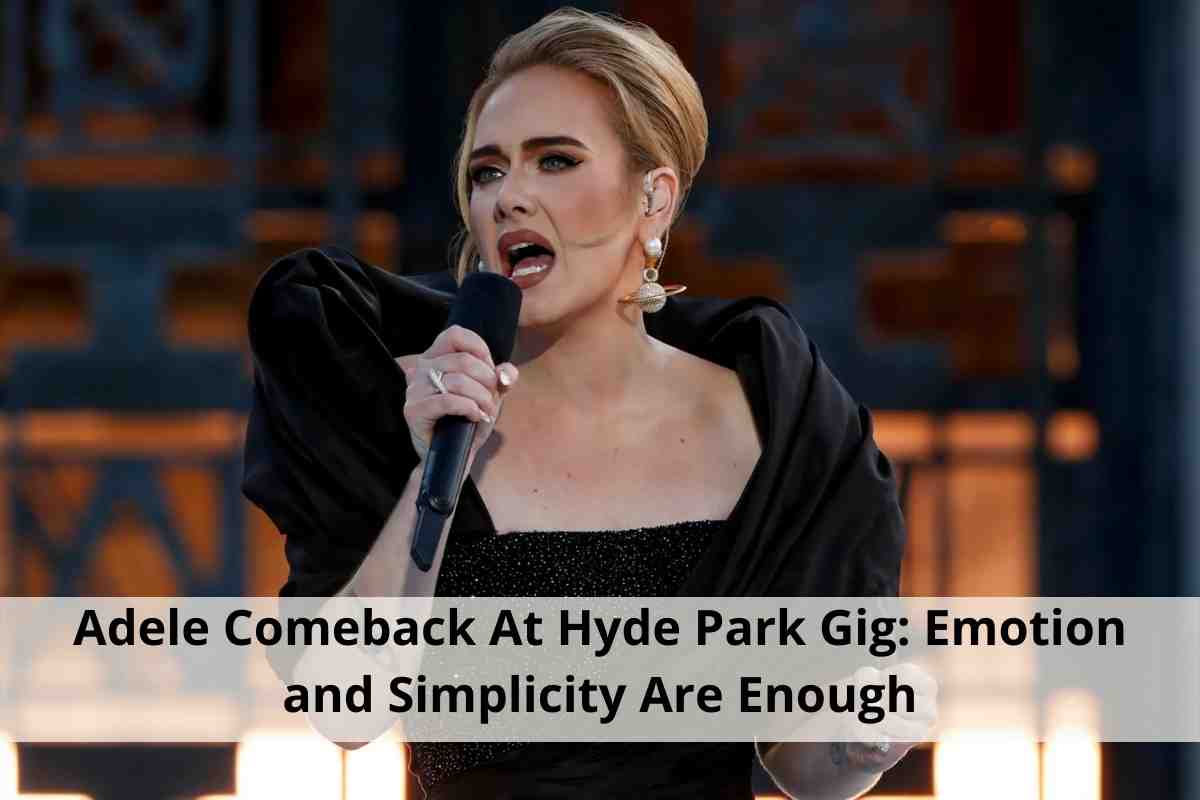 An English singer and songwriter by the name of Adele Laurie Blue Adkins MBE With the help of XL Recordings, Adele made her debut as a solo artist in 2007. The tracks “Chasing Pavements” and “Make You Feel My Love” from her first album, reached the UK top five. The album received platinum and gold certifications in both the UK and the US. In addition to winning the Grammy Award for Best New Artist, Adele received the Brit Award for Rising Star.

Adele is very much in discussion due to her presence on stage in Hyde Park for her first public concert in five years, So in this article, we will basically talk about the statements she made and the atmosphere created by her at the event. To know more about the same you need to read the article.

Adele told the audience on Friday that she was “so pleased” to be back on stage as she temporarily felt overwhelmed at the beginning of her first public performance in five years. “I get so anxious but I love being up here,” Adele told the crowd. “I get so nervous but I love being up here.” During the first few words of Hello, the famous singer from the music industry temporarily lost her composure as she took in the enormous crowd in Hyde Park in London.

She promptly picked up where she left off singing and proceeded to deliver a crowd-pleasing two-hour show for the 65,000 people who had come out to see her in her hometown. She shared with the audience that “it’s so odd to be in front of a crowd again.”

If she had begun performing in Las Vegas as part of a residency that was supposed to begin in January, this performance would not have marked her return to the live stage. However, she postponed it only 24 hours before the first concert and wept as she told ticket holders that the performance “ain’t ready.”

She said on Friday’s broadcast that she will be announcing the rescheduled US performance dates “very, very soon,” and that her crew was awaiting “one more piece of equipment.” Her first expression of emotion was a manifestation of her approachable nature, which is a significant component of the allure that she exudes. It didn’t take long for it to become abundantly clear that the glammed-up version of the girl next door can still hit emotional buttons that very few other pop singers can.

She seemed to be overcome with emotion once again as she watched the audience shout out the chorus to Someone Like You, and a few of the 18 sad torch songs that she sang were not accompanied by poignant sing-alongs from the audience.
In addition to these brief outbursts of passion, she gave off the impression of being obviously glad to be back on the main stage.

Her most recent album, 30, was released in November, although she did appear on two television specials to promote it; nonetheless, this was her first genuine ticketed event. She said on Friday that while she gets really anxious before each performance, her favorite part of being on stage is performing.

Many of the people who were planning on seeing her in Las Vegas will be left wondering why she wasn’t able to perform there as well. It is obvious that she has regrets about that embarrassing incident. She told the gathering in London that she was aware that a lot of people had been disappointed, “which is mortifying for me.” On the other hand, she said that she “had to” make that choice. She has not completely revealed the reason why.

Her set-up for the British Summer Time event did not need a particularly difficult process. She was standing in front of a band that was six members strong and had three backup vocalists who were organized on two stairs that were two feet high. Above them was a stacked fringe of beautifully colored tassels, and about halfway through the performance, those tassels raised up to expose the center section of a wraparound screen that filled the stage background.

At one point, she made an appearance at the end of a catwalk that stretched into the audience, accompanied by a grand piano. At the conclusion of the performance, there was some confetti, some flame-throwing pyrotechnics, and fireworks.

Adele trying to contain her tears while performing “Someone Like You” at British Summer Time at Hyde Park today. #AdeleBST

These bells and whistles hardly seemed required, and the audience would have been more than content if the only additional bonus had been her signature north London banter in between songs.

She inquired as to if anybody was celebrating their birthday, handing out dedications in the manner of a local radio DJ. One of the people sitting in the front rows was celebrating their wedding anniversary. “27 years? Oy!” After that, she inquired, “Are there any divorce parties scheduled for tonight?” As the shout of the audience grew louder, so did she: “You liars! Ha ha!”

After just a few seconds of playing her James Bond theme, “Skyfall,” she halted the performance to warn the stewards that someone in the audience need assistance. She did not begin playing again until the stewards had attended to the situation.

At the conclusion of the song, she discovered another person who could have been killed, and her tone of voice changed to a more frantic tone. “Do you need any assistance? Do you need assistance, or are you just waving? Oh, you’re making a hand signal!” She burst out laughing once again and couldn’t stop.

At one point, she asked whether there were any fans of the program Stranger Things in attendance, and for a brief minute, it seemed like she could be going to bring out Kate Bush, whose song Running Up That Hill has gone back to number one after becoming the unofficial theme for the show.

Adele is elegant while sitting by a piano during her Hyde Park show.#AdeleBST

But no. Adele only wanted to form a connection with the audience throughout the most recent series, of which the second half was published on the day that she was performing. She made light of the situation by saying something like, “I’m going to be exhausted tomorrow, eating up part two all night.”

Those who are planning to watch her on Saturday will be crossing their fingers that she was able to get enough rest so that she would be in top condition for the second night of her performance in Hyde Park. After then, there are no other performances scheduled for her until, presumably, she performs in Las Vegas.

This performance demonstrated that her heartfelt melodies, piercing voice, and genuine presence is more than capable of leaving even the most enthusiastic audience members with a pleasant glow. She is now putting the final touches on those plans.

This was all for Adele Comeback at Hyde Park Gig, we hope that you found our content informative. For more such content please visit nogmagazine.com